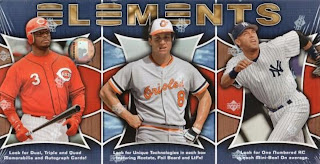 Last weekend we had a great time ripping two boxes of baseball cards. I've featured a box of 2007 Upper Deck Elements many, many moons ago here on this blog. When I ran across a box locally I had to jump on it as it's such a fun product to rip. We also opened a hobby box of 2021 Topps (a first for me) as well as one retail blaster box for good measure.
We'll start off with the recap of the UD Elements box. If you aren't familiar with this set, I wouldn't be surprised and it was a "one and done" product for UD. The gimmick if you will for this set was that it featured 3 different card technologies. The box is actually an outer sleeve that houses 3 mini boxes. Each mini box had 5 packs with 3 cards per pack. Each mini box featured a different card technology - acetate, etched foil or reflective foil. Each mini box also yielded one hit.

The acetate cards are clearly my favorite...bad pun intended. I'm a sucker for clear cards and these fit the bill. Here we have examples of Griffey, Ichiro & Chipper of these awesome cards. 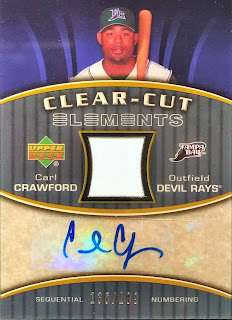 The hit of this box was this Carl Crawford Clear-Cut Elements jersey/auto. What I didn't realize at the time was that this is the silver parallel, numbered to /199. I believe the bronze versions are numbered to /399. Crawford may not have been the best name to pull in 2021, but in 2007 this was a nice(r) card.

The etched foil cards look like Upper Deck's Special F/X cards. We didn't pull the same star power out of this mini box...unless you're a Phillies fan who will probably argue with me! 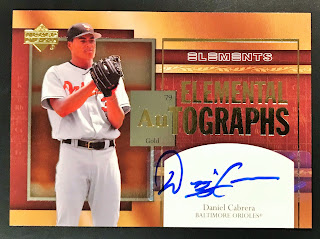 The hit from this box was a Daniel Cabrera Elements Elemental AuTographs...get it? Au is the periodic symbol for gold...and the card has a gold color?
Stupid side note...this makes me remember how my 8th grade science teacher helped us remember the difference between gold (Au) and silver's (Ag) periodic symbols. He said if someone stole your neckless and it was a gold neckless you'd probably be running after them shouting "Aey u!". If it was just a silver neckless you'd probably just hang your head in disappointment while uttering the words "Ahh gee". Silly? Yes...but here it is 30 years later and I still remember these two elements!

The reflective foil, or Light F/X as it believe it's called are very nice looking in hand. They have that rainbow refractor like sheen to them. Manny, Sheffield and Rolen...not bad at all. 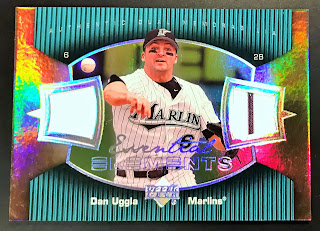 The hit of the third mini box was this Dan Uggle Essential Elements dual jersey card. Uggla was a Braves killer during this time...then Atlanta signed him and it was down hill from there! the card features a decent design overall and at least one of the two jersey pieces had a single pinstripe to pull the card up one notch from boring.
While we didn't quite pull some of the names/cards I was hoping for, it was none the less a fun product to feature and rip in the group. Up next, 2021 Topps Series 1!
Up until I ripped this box, my exposure to the first cards of the baseball season had been small. Like many, finding retail product in my neck of the woods is like most places...tough to near impossible. This made ripping this box that much more enjoyable to me. 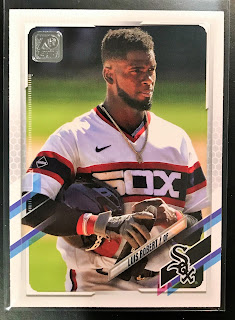 I know Topps changes the little production code on the back of the cards for the SPs and SSPs, but I'm old dang it and my eye sight sucks so I trying to decipher if you have an image variation can suck. Thankfully this year it seems all the SPs are flipped backwards in the packs...at least that's what I'm told and that's who this Lou Bob card was found in the pack. 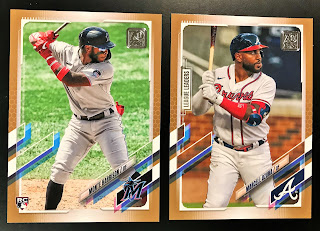 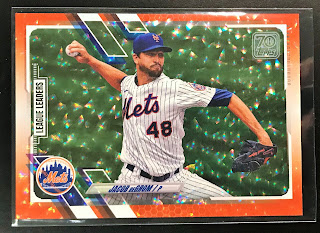 I call these parallels "Ice", but I believe in this set this is just referred to as a Orange parallel. Serially numbered to /499, they do look better in hand than scanned. DeGrom is a good pitcher and with the other offseason acquisitions the Mets made I'm afraid they may give the Braves some fits in 2021. 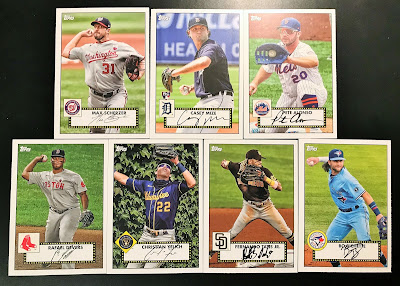 These 1952 Redux cards are printed on thicker brown cardboard (think Heritage) and feature the class the '52 design. For some reason I do rather like this insert set and my have to chase all the cards down. Usually reprint sets don't float my boat, but these are nice. 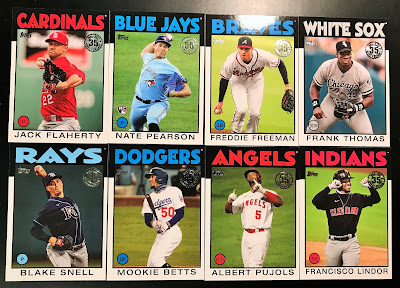 One of the other inserts are these 1986 Retrospectives. Maybe it's because I wasn't collecting cards in 1986 (I was all about Transformers baby!), I just can't get into this design. I'm glad to have pulled the Freddie Freeman, but these just don't do much for me. My good friend from Cards from the Quarry happens to be building this insert set so I'll be tossing the cards I pull aside for him. 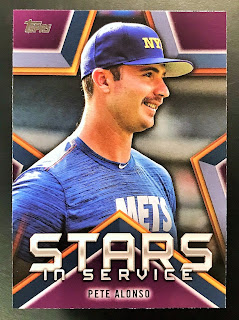 I honestly don't know much about the Stars in Service inserts, but from the name of the set and the hat Pete is pictured in, I'm sure I can easily figure out the gist of the set. 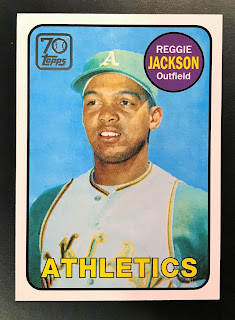 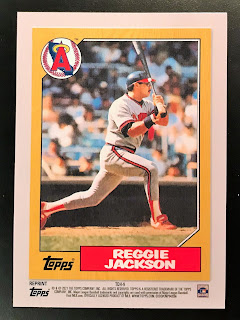 With this being the 70th anniversary of Topps I guess I should have expected more themed reprints. This card of Reggie features two different previous years. 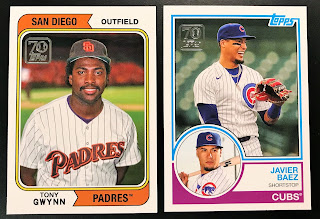 This set borrows on the Archives idea players are pictured on different designs they weren't originally featured on. This sort of thing I can get behind more than just a straight up reprint set. I particularly like the Gwynn. 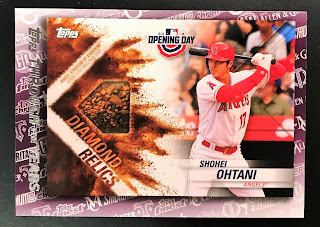 Look! We pulled an uber rare (and super thin) relic card featuring actual dirt!! We're rich!! These Through the Years cards may be pissing a lot of people off, but in reality they don't both me the least bit. They do seem kind of pointless, but assuming you can actually read the back of the card you'll be educated that it's not a real auto (or dirt in this case). 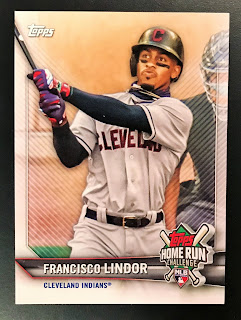 Home Run Challenge interactive inserts are back for another year. I've only redeemed one code before and that was for a Freddie Freeman card that I had, but when I entered the code it said I had a Mookie Betts card. It became a winner and I was shipped a nifty card in 2020...of a freakin' Dodgers player! Hopefully if the recipient of this Lindor card redeems it'll be for the player pictured. 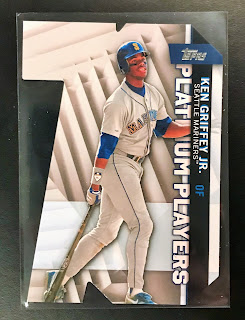 We don't see a lot of die-cut goodness from Topps these days, especially in their flagship sets, so I'm loving these Platinum Players cards. I've only pulled one other card from this set so it'll be a tough set to build for anyone who wishes to do so. 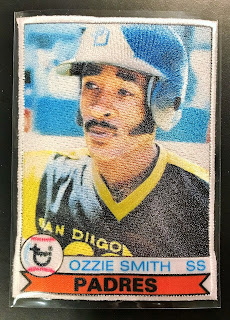 Our hit of the box ended up being this Iconic Patch card, seeded 1:1,385 packs. Its basically a patch, no cardboard here. It's cool and we got a good player, but it's not what I thought the hit would be. Then again I'd take a card like this over a plain white jersey swatch any day.
It's rare that I get to feature new, current product in my breaks because 1) they aren't easy to come by and 2) the prices of most new product are over inflated. My goal with these Affordable Group Breaks is to offer up fun product to rip at reasonable (or affordable!) prices. I can say I've got two hobby boxes of 2021 Topps Big League on the way, but other than that it remains to be seen if I'm able to muster up any other current product. I do however have a lot of fun 90's product (and more) on the horizon. Thanks to you all that have participated and continue to support this side project of mine. Until next week!
at 7:13 AM 7 comments: 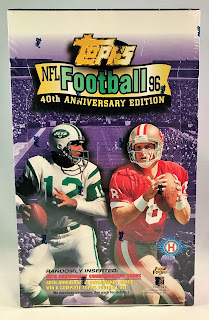 This break will feature a hobby box of 1996 Topps football. 36 packs per box, 12 cards per pack. Key RCs include: Mike Alstott, Marvin Harrison, Keyshawn Johnson and Eddie George. Prices are listed by each team. All cards ship. Stacking applies so the price does not include shipping. If you have questions on his this works please let me know. We'll break this box Live on my YouTube channel on Friday, 03/05/21 at 10 PM eastern.

To claim your team(s) please comment with your request and submit your payment at that time. If you haven't participated in one of my breaks, please email me (flywheels@yahoo.com) your name & mailing address. Please send your payment as Friends & Family - please don't put anything in the comments section: paypal.me/flywheels86 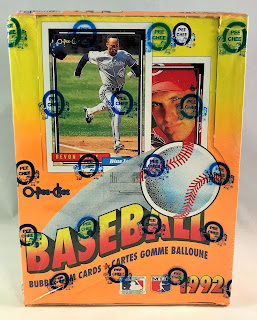 This break will feature a box of 1992 O-Pee-Chee. 36 packs / 15 cards per pack. This set mirrors the 1992 Topps set, but with the OPC logo on the front and bi-lingual bio info on the back. The 22 All-Star cards were replaced with an exclusive cards, 4 of which are a Gary Carter tribute. Prices listed beside each team. All cards ship. Stacking applies so the price does not include shipping. If you have questions on how this works please let me know. We'll break this box Live on my YouTube channel on Friday, 03/05/21 at 10 PM eastern.

Today's post is a shameless plug for my YouTube channel. Bear with me however as this is one of the first time I've tried sharing cards using this format. I used my light box I usually use for my toy photography to record the video so I'm still trying to iron out all the wrinkles.

Well all know of the delays in requesting cards you've purchased from COMC.com and my order was no exception. I honestly can't remember when I requested shipping, but I remember that it took several months for the order to arrive...maybe 6 months? It didn't bother me too much since some of the cards sitting in my account had been sitting there for years in some cases! I love the service, but the prices aren't always great so I don't immediately think to use their services when searching for cards. However I was able to find some great deals on some hard to find a parallels of Rey.

At the time of this post I hadn't planned on scanning the cards as I thought I'd just "borrow" the card images from TCDB, however updating my collection I see that there are a lot of images missing that I can provide. I love the site so much that I feel obligated to help so I guess I know what my Sunday afternoon project is going to be this week!

It's getting harder and harder to find the cards I still need for my PC. I'm down to some very low numbered cards and HTF non-numbered parallels like his 1996 Pinnacle Certified Mirror Gold. I've got saved eBay searches in place to help. I've also got my eye on a few cards of his that I need...but I need to move some various items first to free up the $. Thankfully I'm not actively searching his 1/1 cards and will consider my super PC complete without those. Then again, if I ran across a 1/1 at the right price I probably wouldn't say no either.

This break will feature a hobby box & a retail blaster box of the newly released 2021 Topps Series 1. Prices listed beside each team. All cards ship. Stacking applies so the price does not include shipping. If you have questions on how this works please let me know. We'll break this box Live on my YouTube channel on Friday, 02/26/21 at 10 PM eastern. 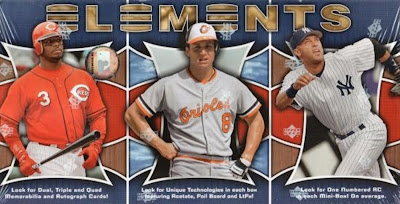 This break will feature a hobby box of 2007 Upper Deck Elements. 3 mini boxes / 5 packs per mini box / 3 cards per pack. Each box features a different card technology (foil board, LTFX, PETG or acetate). Box should yield 3 hits. Prices listed beside each team. All cards ship. Stacking applies so the price does not include shipping. If you have questions on how this works please let me know. We'll break this box Live on my YouTube channel on Friday, 02/26/21 at 10 PM eastern.