Don't tell my wife My Cardboard Mistress sent me a package!

Last week was a blur for me.  I was sick for most of the Thanksgiving holiday.  It was a crappy week to say the least.  The timing of Spankee's package was perfect as it was just the little pick me up I needed.  He contacted me about some cards he found on my (way out of date) want list and wanted to make sure he had the correct mailing address for me.  Now I guess the pressure is on me to find something suitable to send him in return.  Spankee if you are reading this I promise to get you something as soon as I can to thank you for the cards you sent.

The card I was most looking forward to receiving was my second of the set that I'm trying to build - 2001 Topps Stadium Club King of the Hill dirt relic.

He also knocked off a several cards from my 2011 Topps Allen & Ginter want list.  Guess I should get up off my butt and update the list now!

When parallels mean something

Parallels are nothing new in the world of sports cards, especially with baseball cards.  Correct me if I'm wrong (and I'm probably wrong) but one of the first parallel sets I remember were the 1991 Topps Desert Storm parallels...and you may or may not count those since they weren't randomly packaged in packs.  Another prominent memory of parallels that seemed to get out of hand during my collecting years (started in 1990 by the way) were all of the Gold Medallion cards in Fleer Ultra.

However I will say that some parallels make sense...at least to me.  What I mean by that is there are certain ones that are more appealing to me.  Take for instance this 2011 Topps red bordered parallel from the factory sets.  (I'm not sure why the scan makes the red look so orange)

With the color red being a prominent color of the Braves I can deal with this parallel.  However why would I want to continue chasing orange, green, powder blue, etc. parallels?  My hobby funds are already near non-existent.  If I receive parallels that I don't already own in trades then I'm for it.  I just don't see the need nor do I have the desire to chase down every single parallel unless it's for someone that fits into my PC.

Here is another example of a parallel that makes sense to me.  2011 Topps Update Walmart blue border:

Prior to Francoeur being traded to the Royals I can't say I would've messed with this card.  While the powder blue doesn't quite match the Royals shade of blue I can let this card slide for several reasons.  1) I like Francoeur, 2) he doesn't have near as many 2011 cards and 3) it's an awesome photo.

The one exception I'll make is for players that I collect (see side bar for list).  I'm all for chasing the rainbow or whatever, but as far as going after pointless parallels for my Braves, Panthers or Charlotte Hornets/Bobcats I'll pass.  Even if the parallel is of someone from my PC I'll still probably be choosy going forward.  Well maybe not for Hudson, Glavine, Smoltz and Rey Ordonez.  I just can't seem to get enough cards of these guys!


“Let the message of Christ dwell among you richly as you teach and admonish one another with all wisdom through psalms, hymns, and songs from the Spirit, singing to God with gratitude in your hearts.”
at 4:39 PM 2 comments:

I hope everyone has a great Thanksgiving holiday.  I'll be trying to get over my nasty sinus infection all the while praying my appetite comes back!
at 9:12 AM 1 comment:

We're about half way through the 2011 NFL and my Carolina Panthers are still looking horrible.  I guess the bright side is we're putting points up on the board.  Too bad the defense can't stop the other team putting up more points than the Panthers!  495 total yards given up yesterday to the Lions.  Our defense has more holes in it than my comfortable pair of underwear!

Let's see if I have any better luck than the Panthers w/ this rack pack of 2011 Topps Chrome Football cards.

And there you have it.  Good pack?  Now to help find some good homes for these since my Panthers got shut out.

“Come, let us sing for joy to the LORD; let us shout aloud to the Rock of our salvation. Let us come before him with thanksgiving and extol him with music and song.”

Appropriate verse heading into Thanksgiving later this week.  Hope everyone has a fantastic Sunday.
at 9:16 AM 1 comment:

The timing of finding this pack of NBA cards feels really ironic...don't 'cha think?  Topps Treasure, a money themed set at a time when millionaires are complaining about money and revenue sharing.  I'm still not sure why I picked this pack up out of the discount bin @ Target, but I did so I might as well share the packs contents.

The first card out of the pack was right off the front of the pack...Larry Bird.  OK, not off to a bad start here.

I know this is an unorthodox design to use for a trading card set, but I like it for some reason.  Not a bad 3 players.  I remember seeing Ben Gordon light up the Bobcats in the past.

The last card of the pack was a surprise.  A Gold Refractor of Vince Carter, numbered 13/50.  I think the pack odds listed this as 1:900 something packs.  I like shiny cards and Vince did play @ Carolina so I'm tempted to just keep the card.  Are Vince Carter cards even in demand anymore?

This was the only pack of this set in the $1.59 box and I haven't seen anymore...although I haven't really looked very hard since I'm not a huge NBA fan...especially at the moment with the lockout going on.  That said I may have to eventually look for some of the Bobcats players and their Refractor versions as this gold version is really nice looking.
at 10:00 AM 5 comments:

I could blame the lateness of this post on my having to move my "man cave" and toy room, but in reality madding of Cards on Cards sent me a box of cards long before I undertook the task of consolidating and moving my stuff.  I usually send him Cardinals and the occasional card of Daryl Kile and he usually sends me random Braves cards.

This box however had something different.  It was full of old Charlotte Hornets cards.  I don't do a whole lot with basketball these days, but I do enjoy picking up cards of the Hornets.  I was born in Charlotte and the Hornets were a huge deal when the city was awarded the NBA team.  I got to go a good many of games at "the Hive" growing up.  Muggsy Bogues, Dell Curry, Kendall Gill, Rex Chapman, Kelly Tripuka, Larry Johnson, Alonzo Mourning...they were all local heroes.

When I stopped collecting in the mid-90's I must've given away a lot of the Hornets cards that I had so I was thrilled to see old cards of Fleer, Hoops, Skybox and more.  A lot of the cards were of the early years, but there was a good smaller selection of other cards.  Thank you so much and I'm sorry it took several months to get the thank you out there! 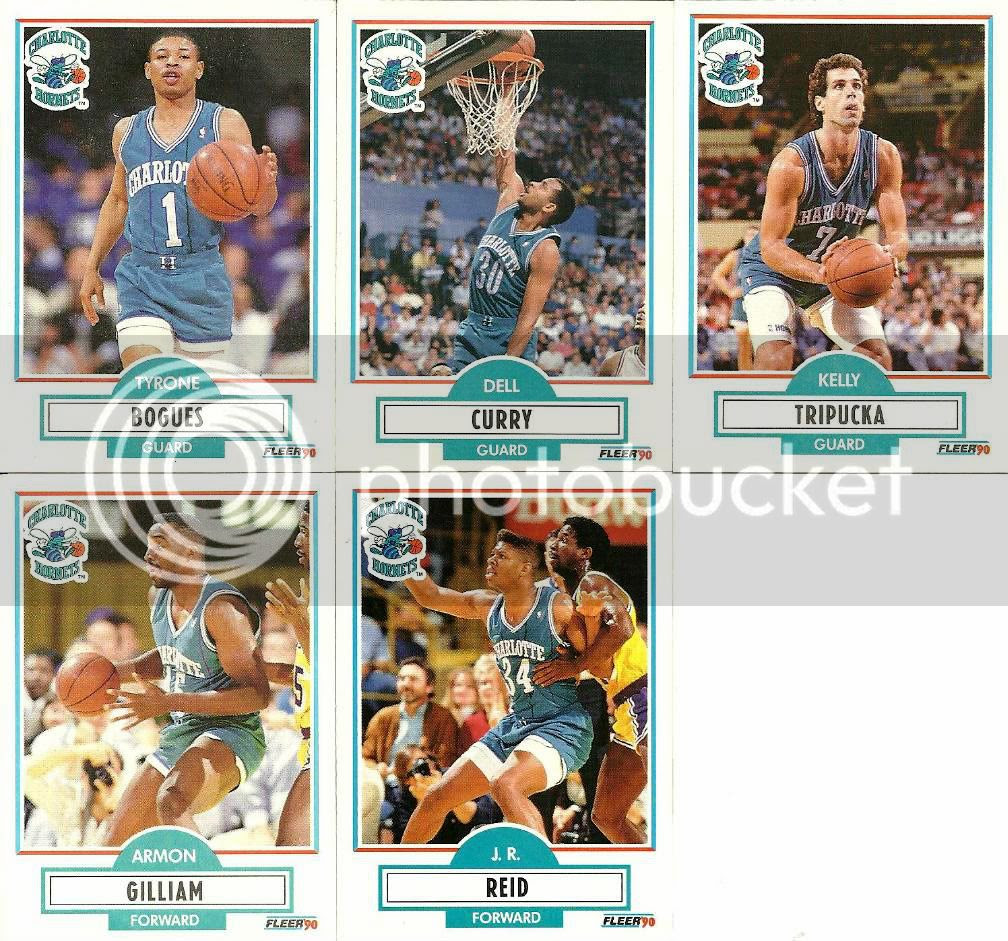 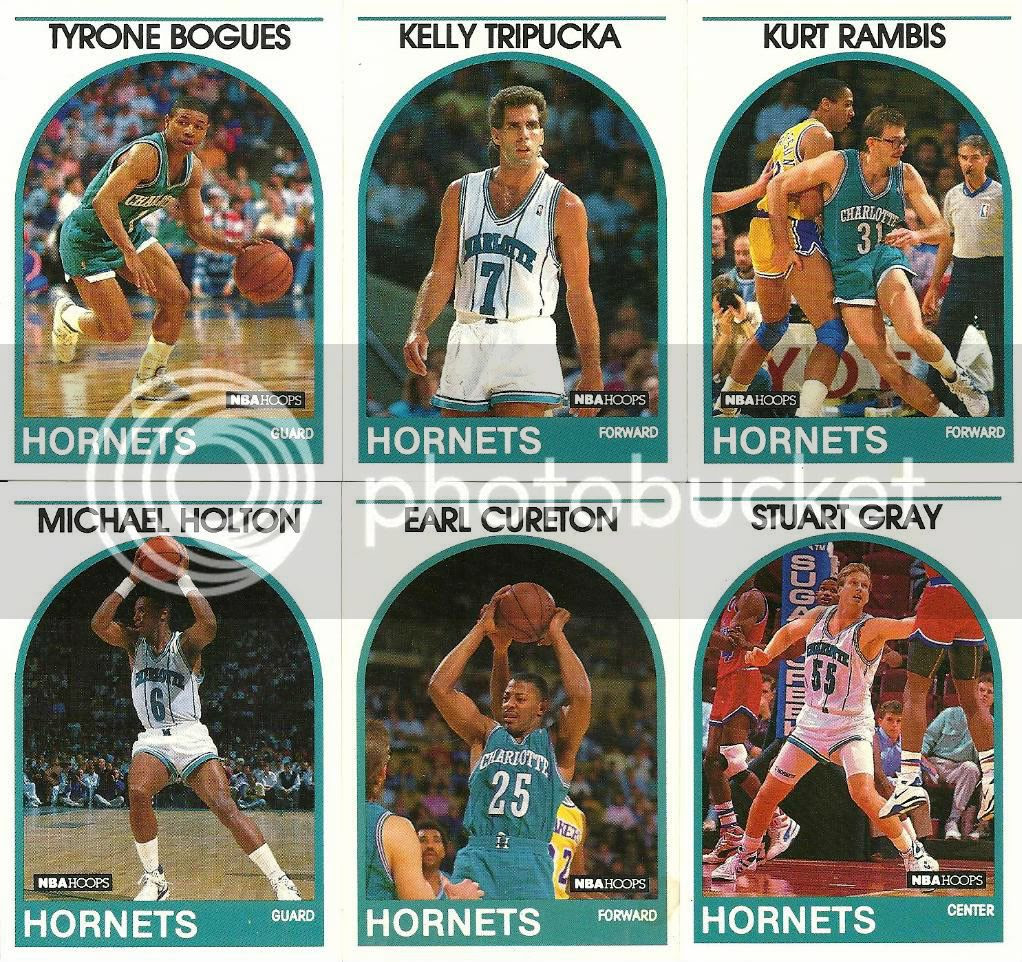 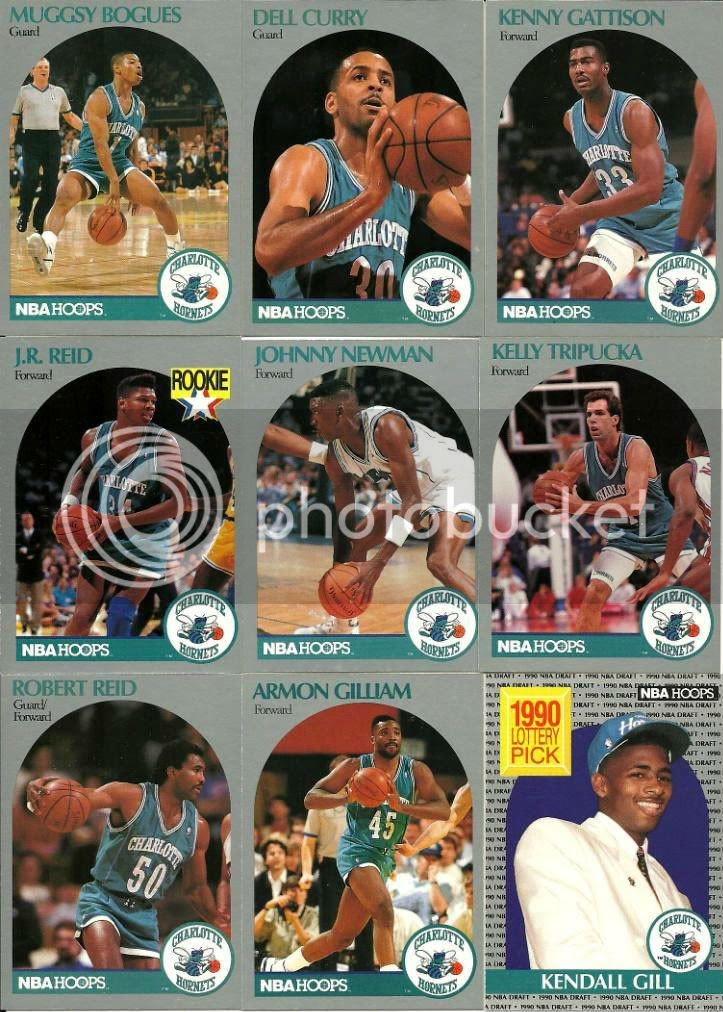 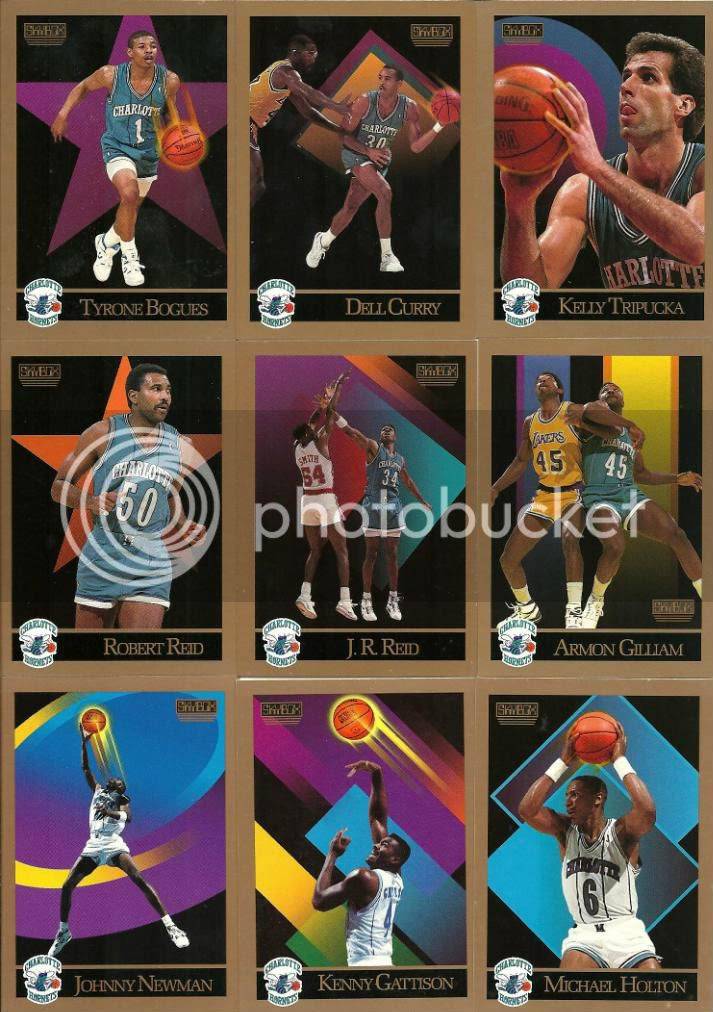 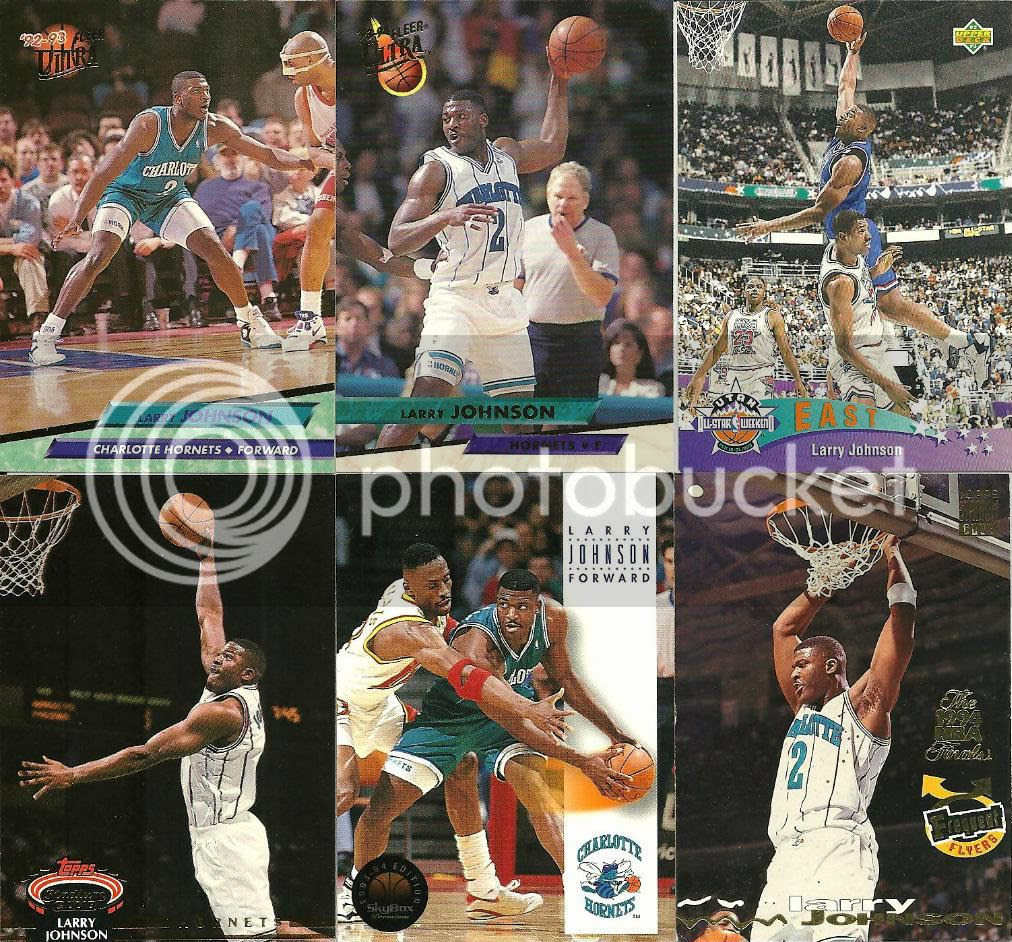 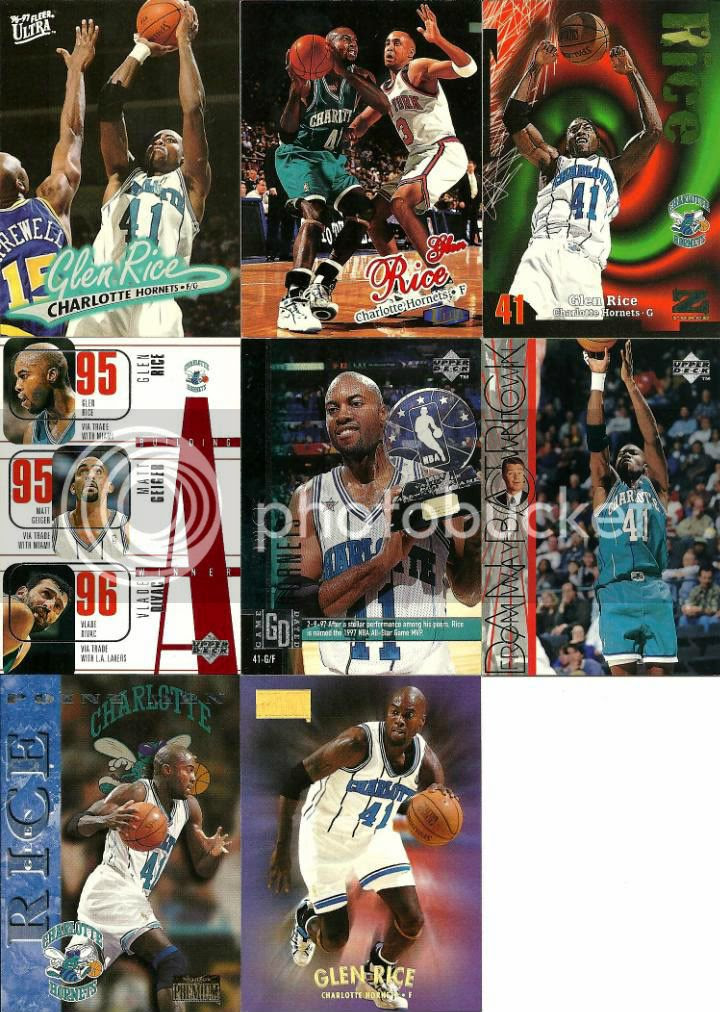 While moving my stuff I recently came across this card that I didn't know I had.  Isn't that a great feeling?  The card hails from 2004 Topps Series 2.  I like David Justice.  I like bat cards.  The fact that it's the first two and "from" the World Series makes it even cooler.

The back reads that Justice has played in 6 World Series and has a record of 2-4.  Of course I remember his time w/ the Braves and correct me if I'm wrong, but didn't he also reach the Fall Classic w/ the Indians and Yankees?  I believe this is one of my favorite relic cards I own of Justice.
at 5:36 PM 3 comments:

While consolidating my "man cave" and toy room recently I came across an old box of magazines that I kept (for some reason). One of the first magazines that I pulled out of the box was an old issue of Beckett. As I flipped through it I remembered how exciting it was for me to get a new issue. It was hard to find a card shop at first locally so obtaining a new issue of Beckett didn't happen that often. I don't remember where I bought this particular issue, but I know why I kept it...glance at the cover below! I tried to scan in the Braves article, but my scanner wanted to auto-crop some of the images and they didn't want to line up correctly. Oh well. Just thought I'd share a little piece of Atlanta Braves World Series and Beckett history. 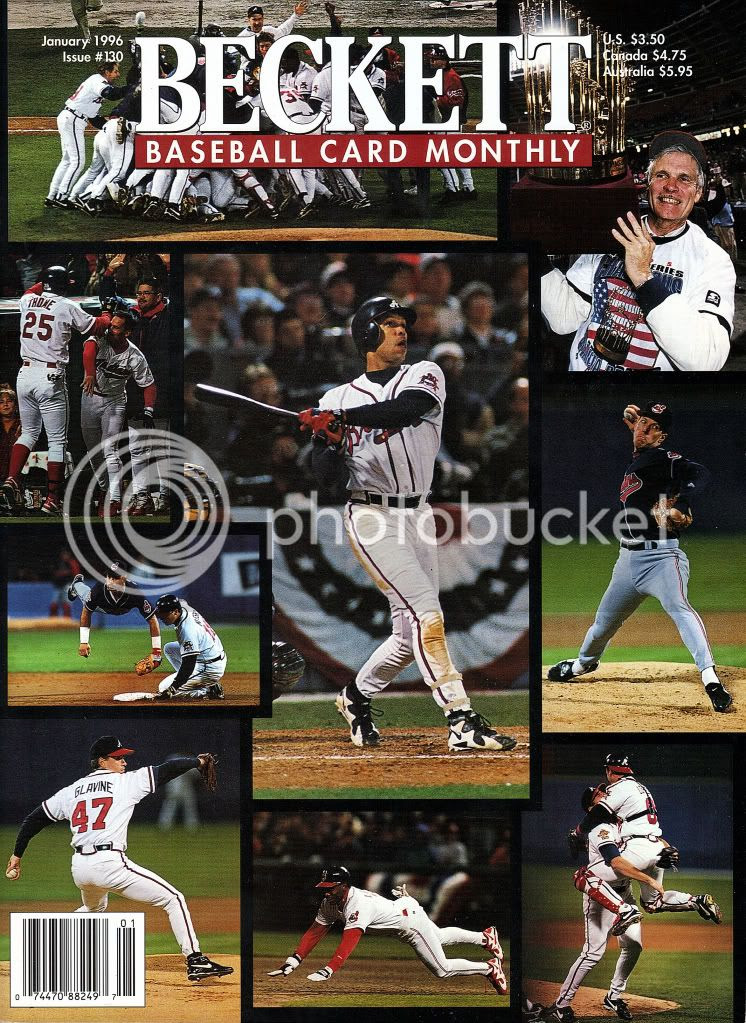 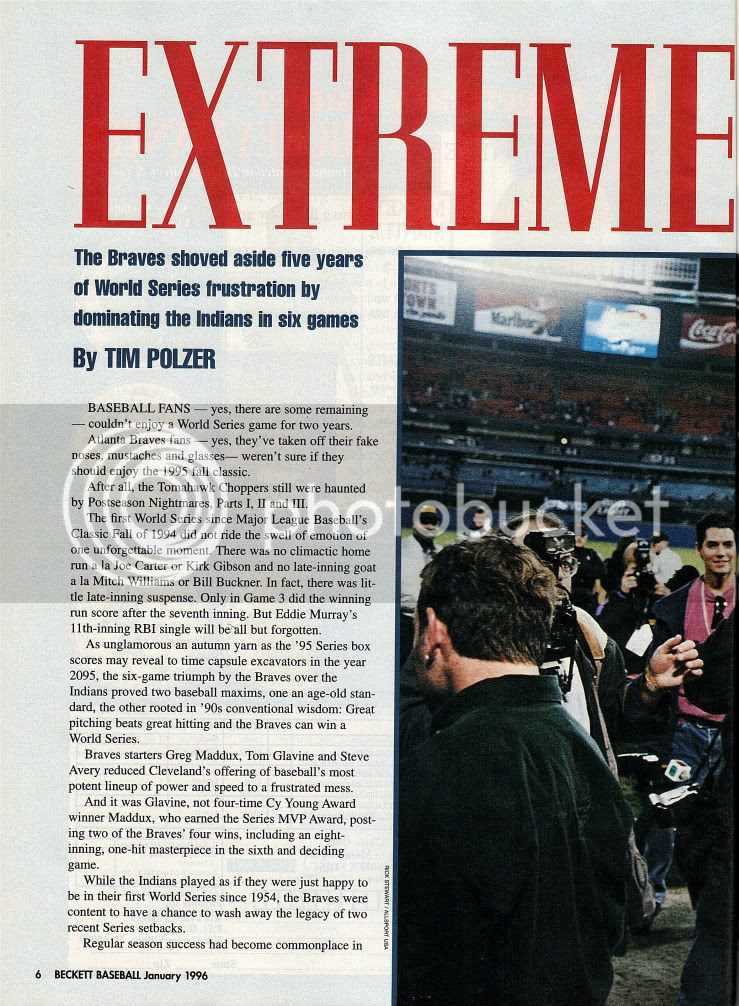 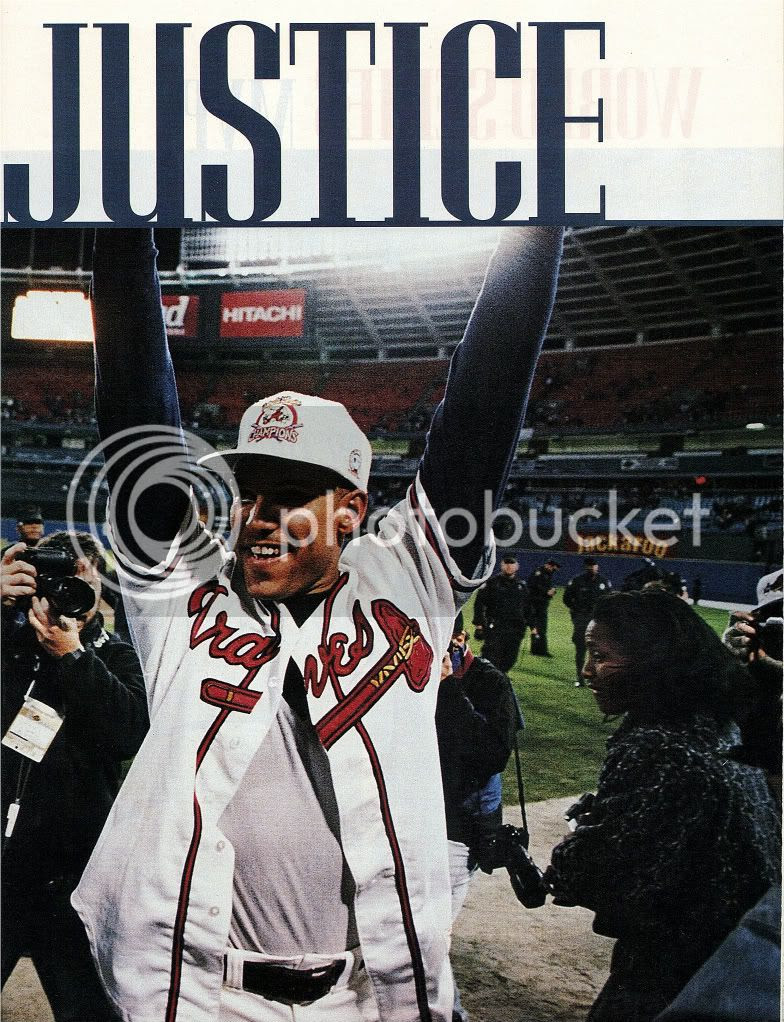 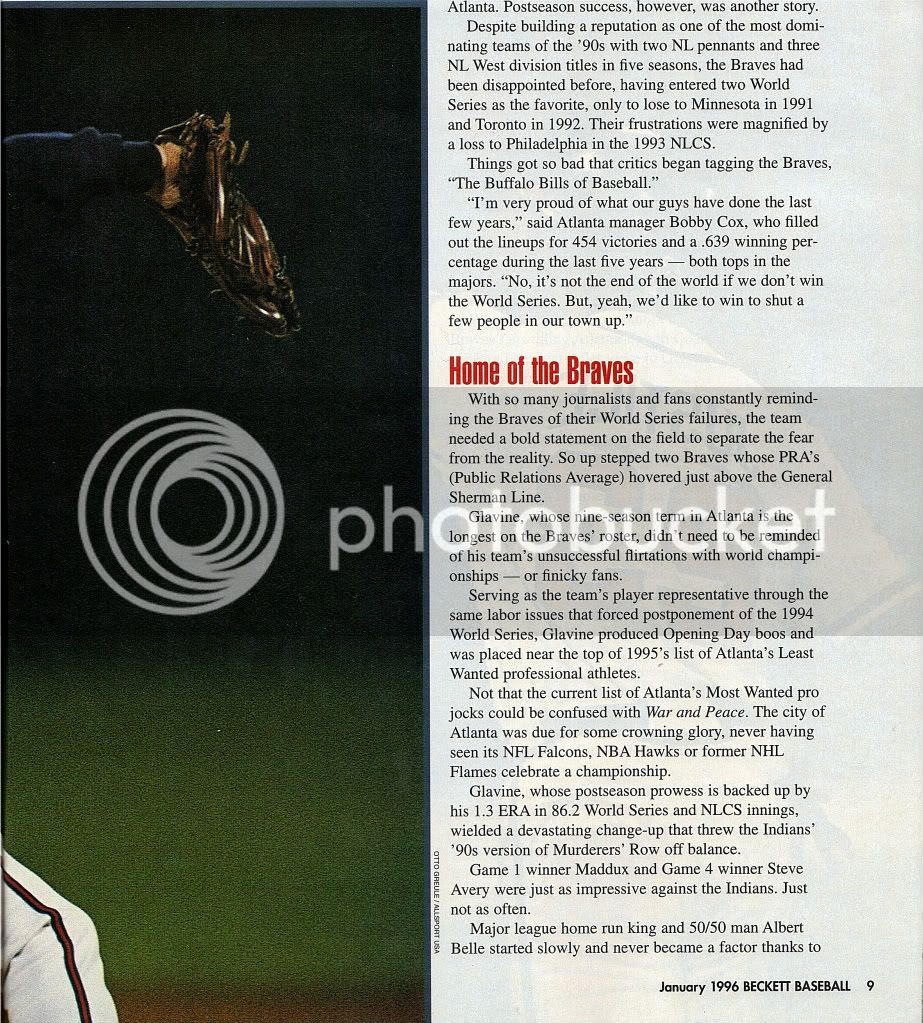 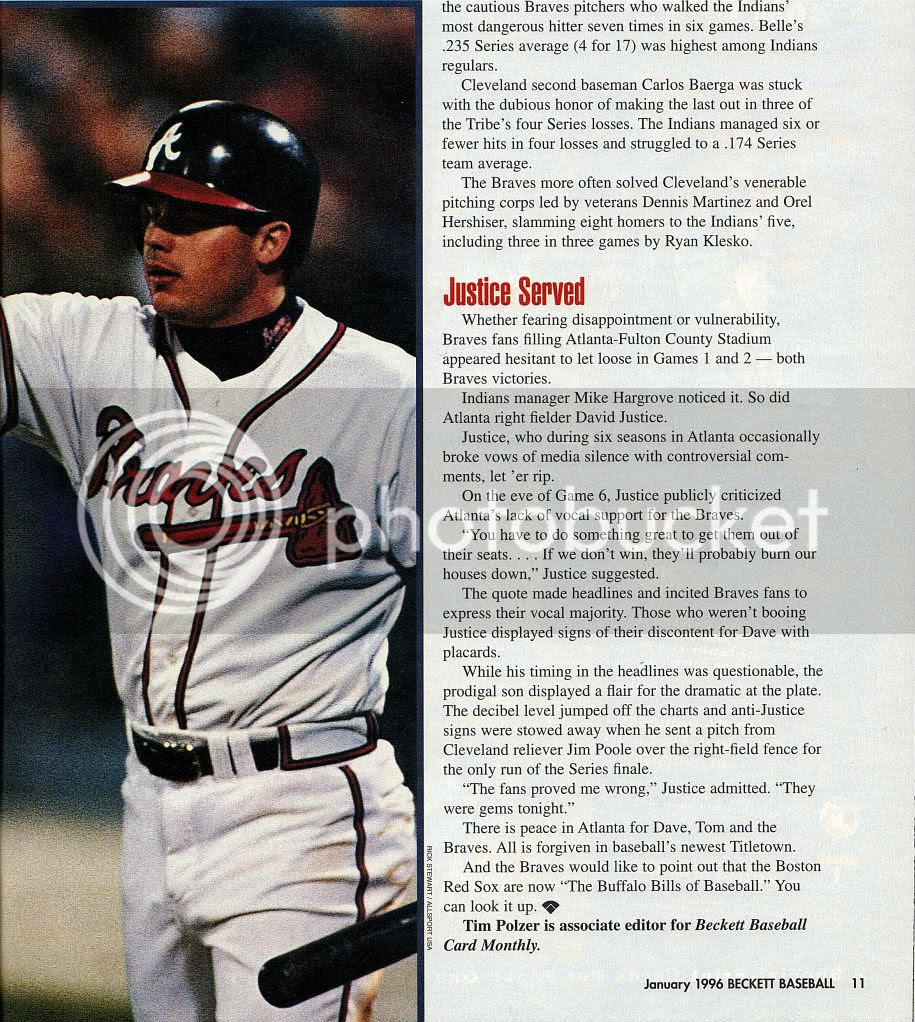 But if serving the LORD seems undesirable to you, then choose for yourselves this day whom you will serve, whether the gods your ancestors served beyond the Euphrates, or the gods of the Amorites, in whose land you are living. But as for me and my household, we will serve the LORD.”

We have this verse painted on the wall in the living room at home.  It's a good reminder to be thankful for the gifts that He has provided for me and my family.

I hope everyone has a great Sunday.
at 12:28 PM No comments:


This box yielded lots of cards for most of the teams and just about everyone got on board with at least one insert.  While the cards are printed on thin cardstock and all of the photos are horizontal there is just something about this set that I really enjoy.  I hope everyone is satisfied with this month's break.

I said in the video that I wasn't going to count these Swing for the Fences game cards as inserts in the overall card counts, but I changed my mind.  Since the cards were seeded 1:2 packs I guess that technically makes them an insert card. 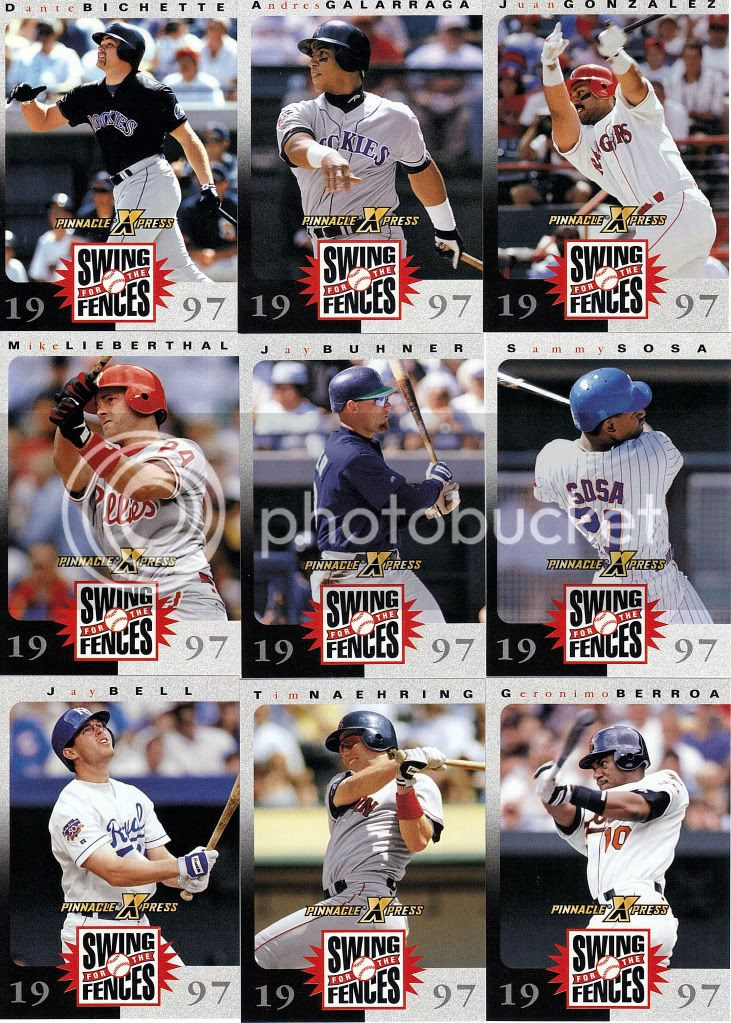 This will be the last Affordable Group Break for 2011.  I'm taking off the month of December and I encourage everyone to spend lots of time with your family and friends.  I plan to keep on doing the monthly breaks starting in January as long as there is interest.  Thanks again for everyone's participation.  I hope to have all of the cards posted early next week.


Quick question for everyone.  Do you like the themed breaks (i.e. all Fleer, all Pinnacle) or do you like a variety of manufacturers?  Let me know as I'm looking at an all Leaf and all Donruss scenarios for future breaks.