Welcome to Retrospective, a new series of posts where I look back at sets in chronological/alphabetical order since the year I began collecting. These posts will have a decidedly Braves feel (of course) and will feature my overall opinion including the highs and lows of the different sets released.

The year is 1990. This was the year a friend of mine first introduced me to the world of baseball cards and collecting. Prior to 1990 I don't believe I ever paid baseball cards any attention. I grew up playing baseball, but my interest in the sport didn't carry off the field. I didn't know what the term "junk wax" was, let alone had I heard the term in 1990. My eyes were being open for the very first time to a world of collecting something other than Hot Wheels or GI Joe. Little did I know this was the beginning of a very long journey that I'm still taking part of 30 years later. 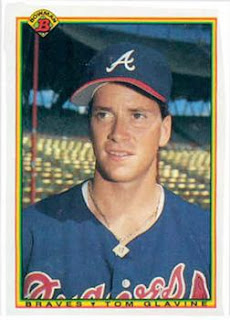 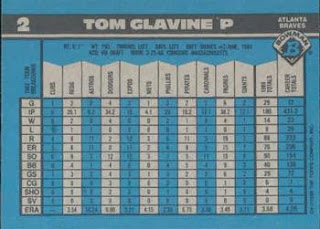 Highs:
* The size of the cards returned to the traditional measurements in 1990
* Minimalistic design lead to larger photos

Lows:
* Card backs were done in a monotone blue and featured non-traditional stats

I saw very little of Bowman in my first year of collecting. Most of my card purchases came from drug stores or the occasional gas station. Hobby shops weren't on my radar at this time and that's where it seems you had to visit to purchase Bowman. For this reason I don't have much to say about this release. 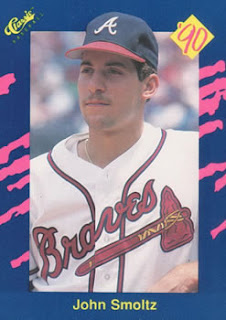 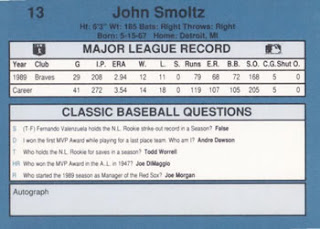 Highs:
* A design that screams 90's
* Trivia...who doesn't like trivia?
* I like the inclusion of an autograph space on the bottom of the card back
* Card backs remind me a little of Donruss

Lows:
* A design that screams 90's
* Lack of team logo on the front
* Minimum stats on the back

Even 30 years later I still don't have many Classic cards in my collection. While I don't actively search them out, I haven't had many sent to me in trades or see them in dime boxes at shows. I kinda like the design and the bright colors and wouldn't mind picking some up...if I can ever find any. 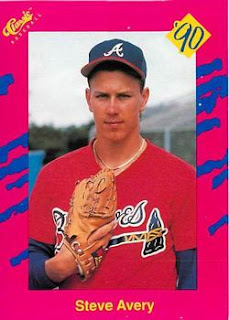 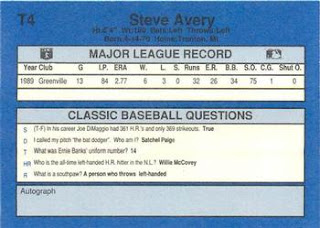 Highs:
* More of the same from the blue set

Lows:
* I don't mind gaudy colors sometimes, but the pink on these cards hurts my eyes

Like with the blue Classic set, these cards of eluded my grasp thus far. I'm not too big on the pink and blue color scheme so I doubt I'll be searching these out any time soon. 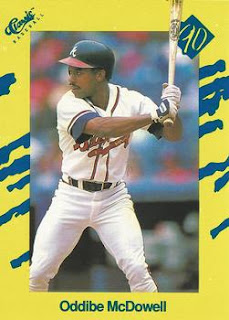 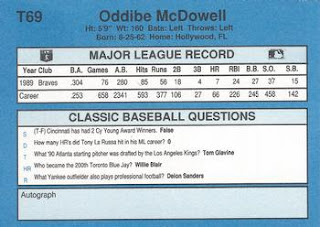 Lows:
* Why couldn't Classic have combined these two update sets into one?

I see to have found more cards of the yellow update set in the wild than I have of the blue or pink sets for some reason. While the yellow isn't nearly as bad as the pink used in the other update set, I still prefer the blue. My love for bright yellow cards hasn't yet come to fruition (though that happens next year courtesy of Fleer!) 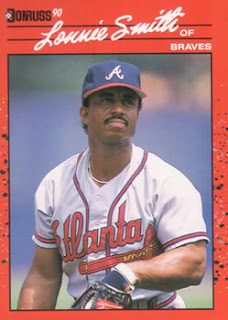 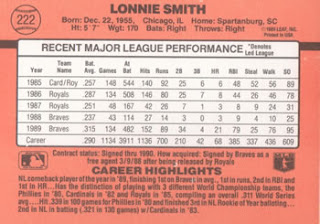 Highs:
* One of the first sets I was introduced to
* Diamond Kings
* Card backs feature a decent amount of stats and other info

Lows:
* Design - it may be "iconic" 30 years later, but it hasn't aged well
* Lack of a team logo on the front
* I never cared for how the players names differed from the front to the back
* Very thin cardstock

This set holds a special place in my memories as it was partially responsible for getting me hook on cards in the first place. While it's not the worst design by Donruss (the 1991 set holds that designation) this set hasn't aged well. As a kid I had a hard time reading the script used on the front for the players name. Today I like the script used as it's different and stands out from other sets released during 1990. I keep resisting the urge to take a trip down memory lane and build this set. So far I've resisted, but the cheap prices on sealed boxes does make it tempting at times. 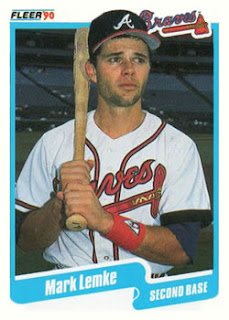 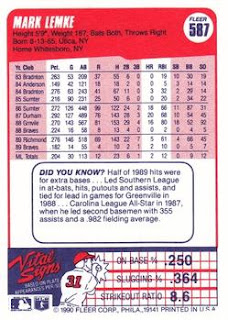 Lows:
* Boring photography on many of the cards

While most of my 1990 collection consisted of Donruss and Topps, I did manage to find a few packs of Fleer here and there. I was a fan of the overall design. The colored ribbon around the photo combined with the white borders were a nice tough, especially when compared to some of the "louder" designs of Classic, Donruss and Topps of the same year. I don't have much attachment to this set and as a result I've not sought out many of the Braves. 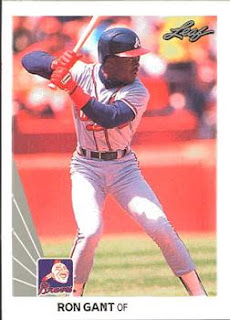 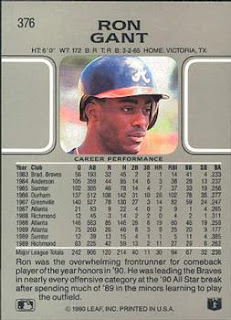 Highs:
* Clean design
* Good amount of stats and other info on card backs

I remember the first time I saw these cards in an issue of Beckett and I instantly was intrigued. The design (front and back), the player selection, the photos...I loved everything about this set. Too bad cards from this set were out of my grasp for the most part in 1990. I would eventually track down most of the Braves, but now I'm looking for other key cards in the set. I've never opened a pack and would love some day to crack a box and build this set. 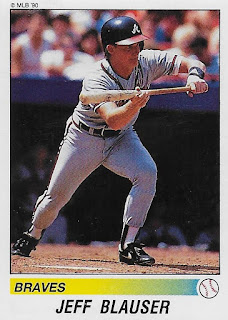 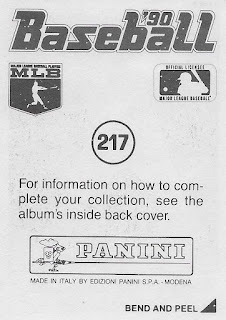 While technically not cards, Panini was the king of stickers and still is today. It would be several years into my collecting before I would come across my first Braves sticker. I've never seen the album these stickers go in, but that's OK as I treat them as very thin cards! 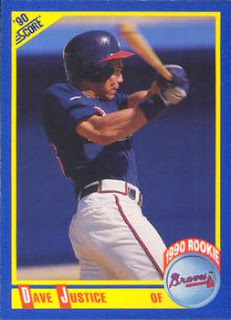 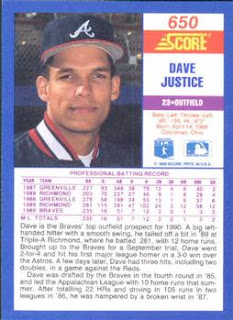 Lows:
* Multiple colored boarders
* Bright borders are a dead giveaway that this set is from the 90's

Score is another brand that I didn't see a whole lot of in 1990, but would go one to become one of my favorite sets each year. Initially the only '90 Score card I would have in my collection was this RC of David Justice. Eventually I'd pick up the rest of the team set. 30 years later this is a set I've been eyeing to buy a box or two of and building the set. My only real gripe with this set is the use of different colored borders. I wish they would have stuck with one color, preferably blue. 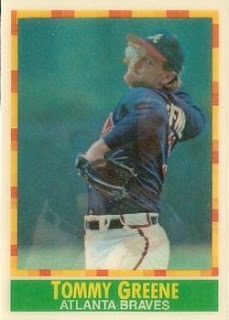 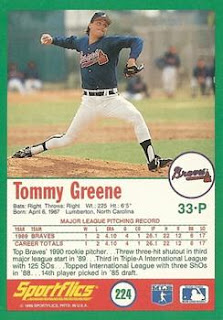 I have always loved lenticular trading cards so imagine my surprise when I discovered the Sportflics brand years after I started collecting. The cards don't scan or photograph all that great, but are fun to look at in hand. I like the colorful card backs, but the large photo doesn't allow for a lot of player stats. These cards do have a tendency to curl a little bit because of the lenticular front and the stock used, but that doesn't impede on my enjoyment of this set. 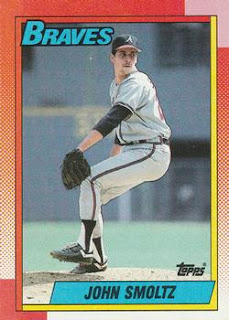 Highs:
* Responsible for my introduction to the hobby

This is where it really all started for me. I know this set gets dumped on a lot by collectors, but Topps (and '90 Donruss) were responsible for getting me hooked on this hobby. If I'm being honest I don't care for the design, front or back, but nostalgia is real and it was too hard for me to say no to recently buying a few boxes. I'm slowly opening the packs and reliving the memories from 30 years ago. 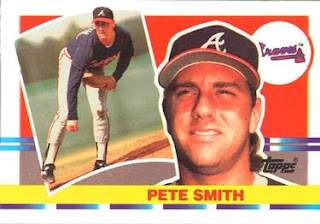 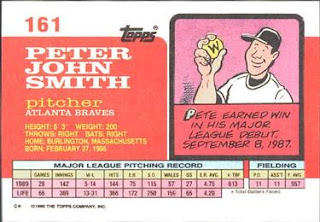 I still remember the first time I saw these oversized cards at a local card show. I didn't know what to think about these. Why were they so big? Did other collectors like these? While I know that today the Topps Big sets do have their fans, I never cared for this set and thus have zero in my collection. Had then been traditional size I'm sure I'd have the Braves players, but then that would defeat this set's overall gimmick of being "Big". 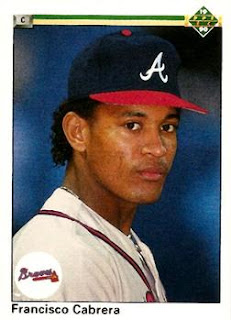 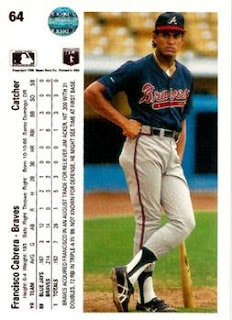 Much like '90 Leaf ushered in a more premium card, so did Upper Deck the prior year. Back for it's second set, Upper Deck featured a white card stock, great photography (front & back) and had UD's signature hologram on the back of each card. Thanks again to Beckett, I would drool over the thought of adding some of the Braves from this set to my collection. As a kid I only managed to open a few packs as I wasn't able to come by them very easily. It's not my favorite 90's UD set, but one set that has aged quite well over the years in my opinion.

1990 sure had it's hit and misses, but will always remain an important year for me. It's funny how viewing these sets 30 years later hasn't changed my opinion all that much. Even as a teenager I knew what I liked and what I didn't like. I dubbed 1991 as my first "full year" of collecting as I didn't open my first pack until mid-summer 1990. 1991 would be just as memorable, if not more than 1990.
at 10:52 PM

Email ThisBlogThis!Share to TwitterShare to FacebookShare to Pinterest
Labels: 1990, Retrospective