Thank you Kemba for 8 great years in Charlotte. Drafted in 2011 with the 9th pick by the then Charlotte Bobcats, Kemba would go on to become one of the best point guards, if not players in the NBA over the next 8 years that no one ever talked about. Playing in a small market like Charlotte, NC, Kemba was overshadowed by the likes of Kyrie Irving, Chris Paul, Damian Lillard and the likes.

Kemba's time in the teal and purple came to an end this evening as the Charlotte Hornets finalized a sign and trade with the Boston Celtics. 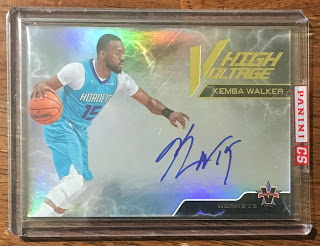 Kemba Walker finishes his time in Charlotte with some impressive career numbers. He averaged 34.1 minutes, 19.8 points, 3.8 rebounds, 5.5 assists while shooting 41.8% from the field and 35.7% from the 3 point arc. In 8 years, Kemba only missed something like 6 games. 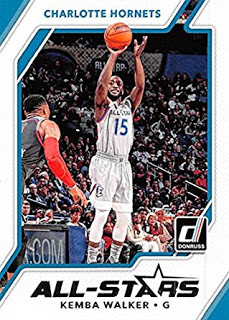 I've been a fan of the Charlotte Hornets since the team's original inception during the '88-'89 season. At times it's been awfully hard to be a fan as the team has never really been able to compete against the upper caliber teams. Attracting free agents to Charlotte has been virtually non-existent so the team has had to rely on building through the draft. The Hornets had some early success in the 90's by drafting Larry Johnson, Alonzo Mourning, Kendall Gill and Baron Davis. However the team has had a lot of strike outs prior to drafting Kemba in 2011.

The Hornets would only have a handful of players (7 to be exact) that would go on to be All-Stars. Kemba was named to 3 All-Star teams, tying the team record previously held by Glen Rice.

Needless to say that Kemba was the face of the Charlotte Hornets. He is the team's all time leading scorer and holds many other of the franchise's records. To see him in another team's jersey will be odd, however I'm honest enough with myself to know he will have a much better chance to win a Championship in Boston than he ever did in Charlotte. As a Hornets fan it's hard to swallow mediocrity, but it's time to rebuild and that means a few seasons of bad basketball. This is the not to say basketball with Kemba was great. He literally had very few pieces around him to work with. Thanks to bad draft choices and the challenges to lure free agents, Kemba had to shoulder it all. 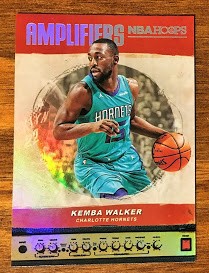 I hope Kemba does well in Boston. He won't be soon forgotten for many Hornets fans, but for now the Buzz has turned around and stung the city of Charlotte and it's fans.
at 10:37 PM 6 comments: 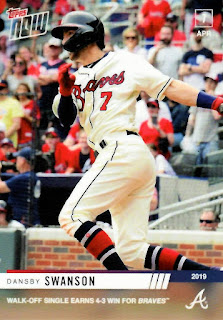 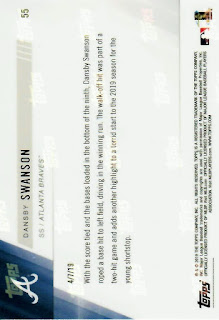 One of the things I was hoping for in the 2019 season was for Dansby Swanson's bat to wake up. He's so much fun to watch defensively, but let's face it...at the plate was another store. Last year he struggled to find his offense. I had heard he was working on this in the offseason so I was eager to see if it would transition to the regular season.

On April 7th he walked off the Braves to a 4-3 win against the Marlins with a single in the bottom of the ninth inning. While Topps hasn't rewarded Swanson with multiple Topps Now cards (yet), he is off to a great start. In fact through the first quarter of the season he is in double digit HRs, matching his total for all of the 2018 season. The Braves' future looks bright with the wealth of young talent and I'm glad to see that Dansby is settling in and being mentioned outside of Atlanta.
at 9:48 PM 1 comment:

Several months ago when Topps released 2019 Gypsy Queen, I found myself with enough eBay sells to afford a hobby box from my LCS, Grand Slam Cards and Comics. However due to work and well, life in general I haven't been able to sit down and really break down the box. I've been off all week for vacation and I'm trying to make the most out of these last few days so I grabbed the box, a new binder and some Ultra Pro pages and went to work. 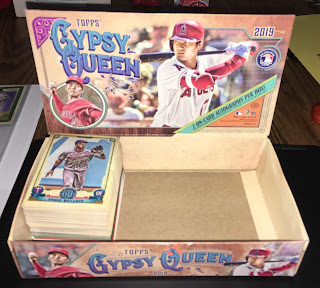 While I did share the highlights on Twitter the night I opened the box, I still like to do these Box Break type posts. Gypsy Queen is a set I look forward to every year and build yearly asd well. This year's design is one of the best since the set's inception in my opinion. The colors really pop and look nice in hand. If I have one critique it's that the card number font size is way too small for my old eyes. I'm sure if you're over 40 like me you've noticed this too! Other than that, it's a beautiful set and one I look to put more of a dent in this summer. 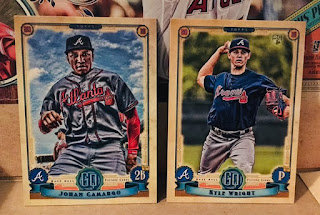 As a Braves fan of course I was hoping I'd hit some of my guys and some of the first Braves pulled were Johan Camargo and Kyle Wright. Camargo was relegated to being a utility player and pinch hitter with the signing before the season of Josh Donaldson, but he has so very few cards that I was happy to see he was included in the set none the less. Wright had a few opportunities early in the season to show his stuff and looked mostly good. Perhaps he'll be recalled in September?

I also ended up pulling base cards of Freddie Freeman, Ozzie Albies, Ronald Acuna Jr, Ender Inciarte and Sean Newcomb of the Braves. 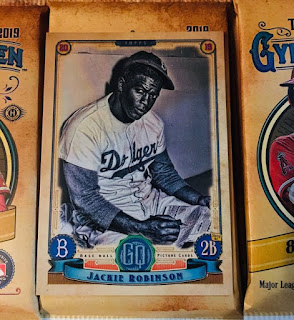 I have a love/hate relationship with SPs being part of the base set. I love pulling them, but I hate how difficult it makes completing the set. By now you'd think I'd be use to this practice in Gypsy Queen since Topps does this every year. My hobby box yielded one lone SP, but at least it was a good one in Jackie Robinson. Now to find the other 19 SPs... 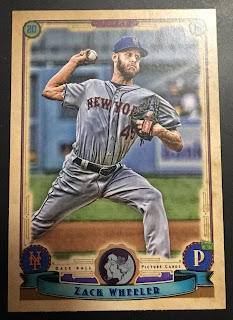 I really don't care for the various parallels in GQ, such as this GQ Logo Swap of Met's pitcher Zack Wheeler. 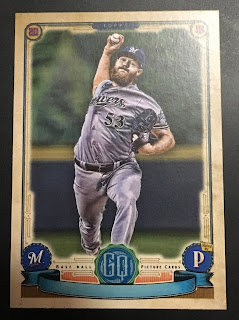 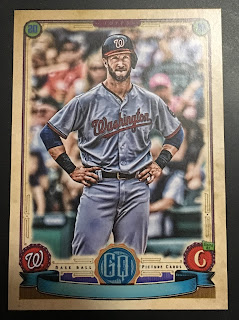 The Missing Nameplate parallels don't do anything for my neither. Who thinks up this stuff? The Wheeler from above and these two parallels are available for trade by the way. 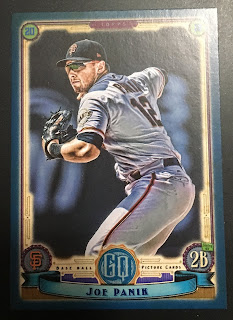 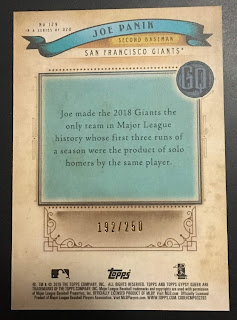 The colored parallels, like this blue version of Joe Panik look good in hand. The card fronts are already colorful and the colored border just adds a little extra flair. 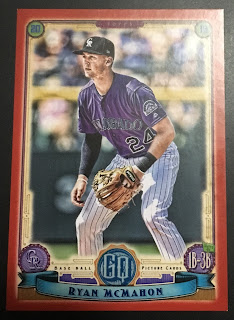 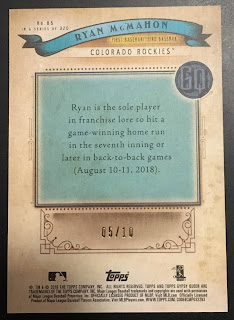 The red parallels were 1:563 packs so I beat the odds with this box. Numbered to just 10, I would've thought I'd found a trading partner by now. Then again, I guess I haven't "shopped" this card around much either. The red looks nice, but I think the blue parallels blend in better with the other colors used. 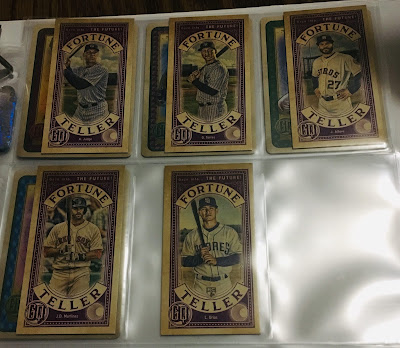 I forgot to photo the Fortune Teller inserts before I put the cards in pages earlier today, but I ended up with 4...the other was from a blaster. These are annoying in 9 pocket pages, but I like the idea behind the theme so I keep on collecting them. 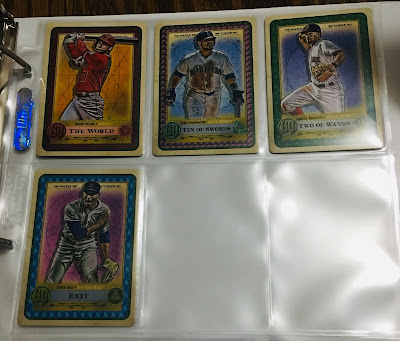 The Tarot of the Diamond inserts from 2018 were nicely done and were a lot of fun. This year's version is more of the same, but with more color. Ended up with 3 from the hobby box and 1 from a blaster. 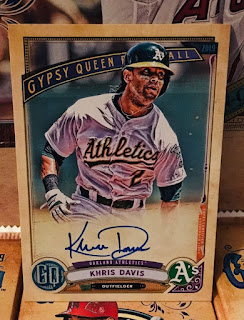 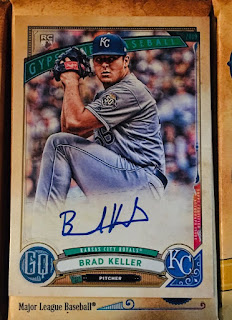 Each hobby box is supposed to yield two on card autos and I did pretty good. The Khris Davis auto is still available for trade (or sale?), but the Brad Keller has since been traded.

The GQ on card autos always look nice and this year is no different. I still don't understand why Topps insists to use sticker autos so much with other product when the annual GQ set shows they can pull off some beautiful on card autos.

The other bonus of buying a hobby box is the inclusion of a box topper pack. This time I pulled three Chrome cards. It wasn't long before I found a trading partner on Twitter and set them off to their new home. Beautiful cards...reminds me that I still need to track down at least the Freddie Freeman card in this set.

I finally got a Want List (added it to my Trading Card Database profile too) made for this set as well as adding everything I'm not keeping to my Trade List. If you think we can help each other out please leave a comment or better yet hit me up on Twitter (@flywheels).
at 9:48 PM 8 comments: