The baseball season is over...well at least for my Braves. Even though I'll be tuning in this evening for the one game playoff between the Cubs and Pirates, and possibly watching the Cardinals some...I'm done with baseball for 2015.

What a sad season it was for Braves fans too. I guess I should have known it was going to be a tough year with a lot of players being shipped off during the off season and even the day before the season started (the bullpen misses you Kimbrel!).

From a baseball card perspective by buying dropped off tremendously. Not sure if it's a combination of being burnt out a little, busy work schedule or a combination of both. I only bought 2 hobby boxes all year long. While I did buy a handful of packs here and there of various Topps products, I was only actively going after building two sets, Gypsy Queen and Allen & Ginter. Even that mission has kinda fallen to the wayside.

All is not lost though. I still have a few random packs to share and Football season is upon us my as of this post my Carolina Panthers are 4-0! Going forward I anticipate most of my posts to be football oriented. While I know that means I'll alienate some readers, it's what I'm passionate about right now...well that and toys of course (see my other blog, Random Toy Reviews).

Before I make that transition to the pigskin, here are a few cards that I picked up that I don't think I ever got around to sharing. 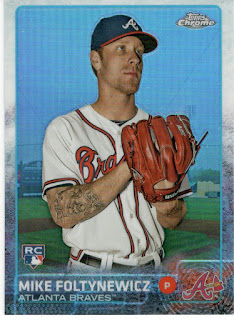 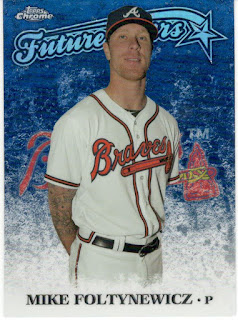 I miss hosting group breaks, yet I know I have way too little time now to try to do that again. Also because of my lack of time to blog like I used to, I find myself reading other blogs and getting in on group breaks like in the past. However a month or so ago I jumped on one of those group breaks by bidding on the Braves on eBay. I grabbed my team in a 2015 Topps Chrome half case break. Didn't wind up with anything too exciting, but I'm glad to add these cards of Folty to the collection. 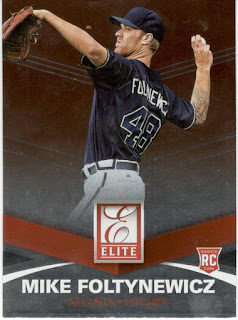 The Donruss Elite cards really do nothing for me, but I ran across this RC of Folty for $.50 shipped so I figured, why not? 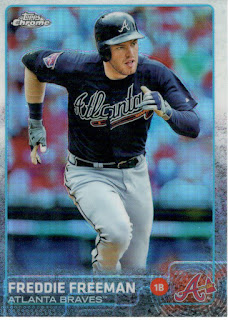 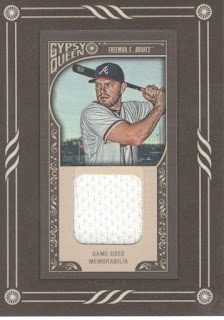 This Chrome Refractor came from the aforementioned group break. The GQ Mini Relic was a early cheap score off eBay. Usually I buy a lot of Freddie's cards, but with my dwindling buying and his stint on the DL this season I guess I just lost some of my Freddie mojo. 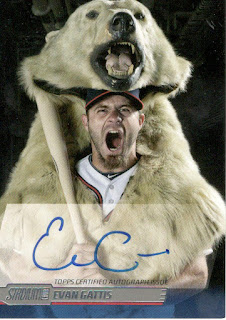 Ah, Evan Gattis. I usually don't buy a lot of cards of former Braves players, but how could I not pick up this card? I really miss "El Olso Blanco", though AJ Pierzynski made the loss of Evan a little easier to swallow. One of the best things about this card was it's cost, just under $5 shipped! 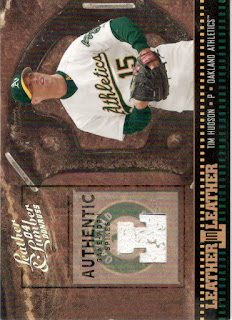 Long time readers know that Tim Hudson is my guy and I've got a pretty decent collection of his cards. This makes finding non-super premium cards of his hard to find, yet someone I had missed picking up this 2004 Leather & Lumber game used spikes card. 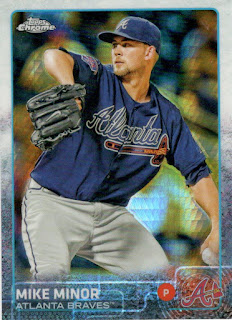 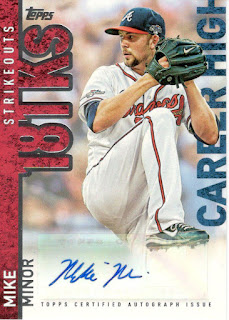 I think this card of Minor is an Xfractor, but Topps quite putting the parallel name on the back of Chrome cards so I really have no idea. I think I got the auto in a trade with a reader here, but then again I'm so unorganized right now I can't recall if it was a trade or an outright purchase. I do know that the Braves could have used Minor's arm in the lineup this season. 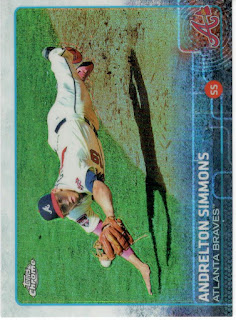 The lone new Simba card is another Refractor from the group break I participated in. Maybe I should have rotated this image horizontal? 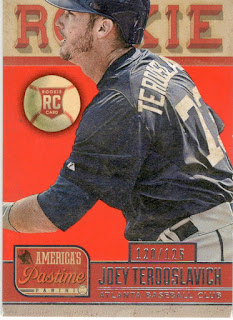 Freedie Freeman spent a good bit of time on the DL this season, unusual for him, however that created opportunities for others to step up. Long time AAA Gwinnett player, Joey Terdoslavich, got a chance to show the fans in Atlanta what he is capable of doing. I picked up this nice wooden RC of his from Panini's surprisingly nice set, America's Pastime. 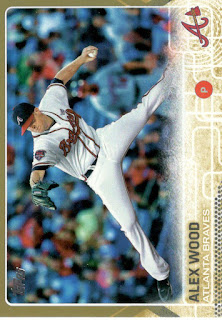 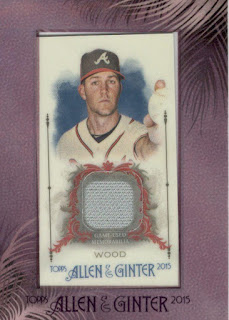 And finally we're to Alex Wood. My hometown guy who was traded away to the Dodgers earlier this season in a trade that would bring Hector Olivera to Atlanta. I gotta admit, this one hurt. I can see wy the team made the trade, but it doesn't soften the blow any. This is about the time I think I hung it all up. I haven't looked for any new Alex Wood cards. I've only seen him in a Dodgers uniform once. He's a guy I'll probably continue to collect, but man does it suck that he sports the LA blue now.

Well that's about it. I think I have a pack or two of baseball cards I may spotlight on a Pack Break post, or I may see if A Pack To Be Named Later is in need. It wasn't a horrible baseball season for me, but it wasn't the most ideal for me either. However I'm a true Braves fan and I'm not giving up...on the team, on collecting or on the blog. It's just time for me to move the spotlight over to the Carolina Panthers and root them on to their 2nd Super Bowl appearance!