Tonight is the 2018 WWE Royal Rumble and with that I thought we'd open a few packs of cards. My interest in the WWE has waned a little in the past few months, however the Rumble is always an entertaining Pay-Per-View event. The company always has a few good surprises up their sleeve, though they don't always deliver. This is the official kick off to the Road to Wrestlemania and I'm hoping it's going to be a fun evening. I'll be tuning in at 7 PM on the WWE Network, but until then let's bust two retail 2017 Topps packs. 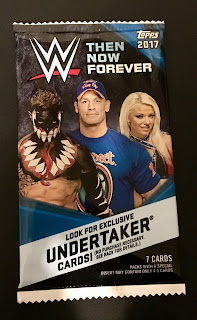 I'm not 100% sure if this set is just called 2017 Topps or if the slogan "Then Now Forever" is part of the set name. Not that it really matters. This set is no different than in years past. The design is based off the same year's baseball design, with a few alterations. Each show's brand (Raw & Smackdown Live) are featured along with "rookie cards", Legends and cards of upcoming NXT talent. Loads of parallels can be found in both the Hobby and Retail versions, along with relics (kiss, mat cards), autographs and other inserts, such as Finishing Moves. 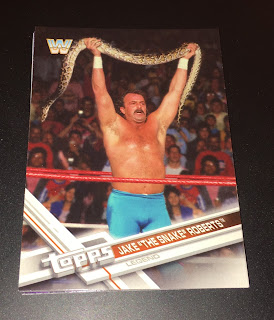 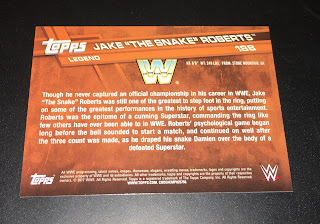 First card out of the pack is a Legends card of Jake "the Snake" Roberts #188. Classic image of Jake and his pet boa, Damian. The classic WWF logo, altered to remove the "F" is used in the upper left corner for the legends. 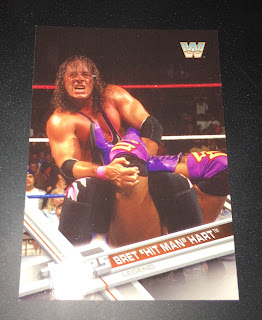 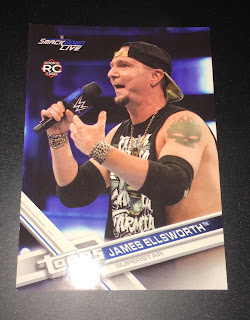 This guy is so annoying. I don't always watch Smack Down Live, but I think they have finally written this goofy character out of the programing. 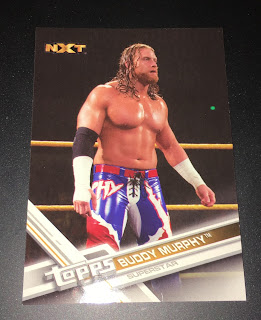 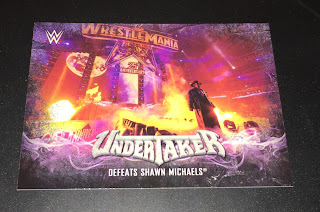 These tribute inserts have been running a few years now with previous subjects of Daniel Bryant and John Cena. I was never a huge Undertaker fan, but I do kind of like these retrospective tribute cards. 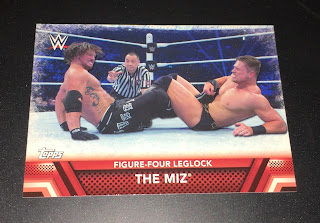 I like the Finishing Moves inserts. Every wrestler has one, some more than one, and those moves go hand in hand with the wrestler's character. Here the Miz shows off the move made famous by the Nature Boy, Ric Flair. 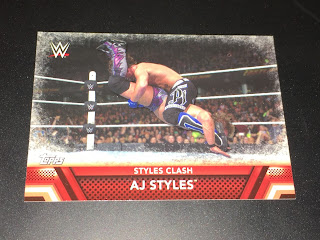 AJ Styles made his name outside of the WWE, but since he came over to the "big leagues" I've enjoyed watching him perform in the ring. He has more than one finishing moves, but the Styles Clash looks to be unconfortable for his opponet. 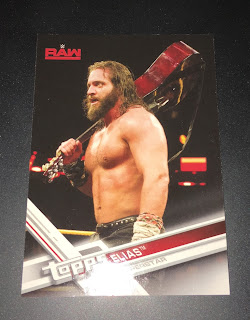 When he first made his debut, I thought his character was a joke. Afterall, not many wrestlers that carry a guitar to the ring are ever taken seriously. However he makes a great heel and he seems to be getting a push of late by the WWE. Rumor has it that he'll face John Cena at this year's Wrestlemania. 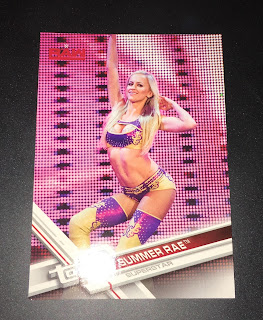 The only women's division representative, Summer Rae was released by the WWE in 2017. I think she requested her release, as to why I haven't a clue. She never did much in the first place so I doubt many fans miss her. 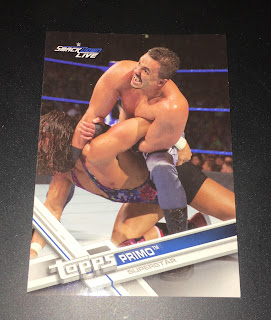 Primo is another wrestler that I'm unsure of if he's still employed by WWE. He was last used with his brother (?) as part of the tag team, The Shining Stars. 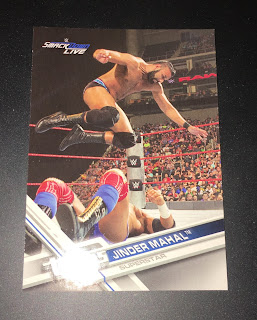 A lot of fans may remember Jinder as part of 3MB alongside Heath Slater and Drew McIntyre. He was never used much outside the silly 3 man group and eventually disappeared. He would later return in 2017 and was given a big push by the WWE. My suspicion is he was given that push as the WWE looked to introduce the WWE Network in the country of India. 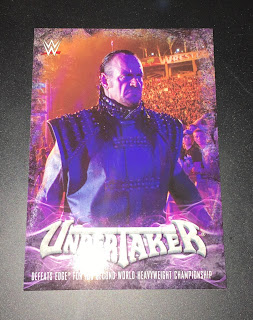 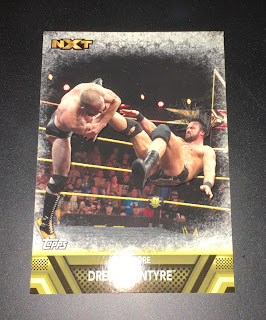 I knew that Drew left the WWE and joined TNA for awhile, but I guess he's back in the WWE as a part of NXT. 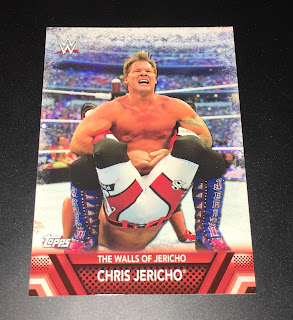 Chris is a very entertaining wrestler who has been around now for many, many years. His Walls of Jericho finishing move has many names, but no one has made the move as famous as Jericho.

That's it. Time for me to collate these cards and put them aside as I only have a few hours left to take care of some other business before it's time for the Royal Rumble. Enjoy everyone!

So the 2017 NFL Playoffs didn't work out the way this Carolina Panthers fan would have liked, but I have enjoyed the ride as most of the games have been very competitive and entertaining. One of the stories from this NFL season (Playoffs included) has been Case Keenum and the job he did at guiding the Minnesota Vikings to one game away from the Super Bowl. 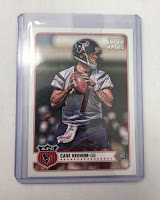 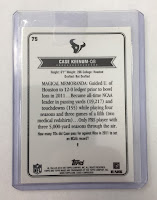 As I looked into his story a bit more, I found out that he is yet another Christian athlete that credits the Lord for his talent and reflects all of the attention off of him and up to Him. Long time readers of my blog may have noticed that many of the players I collect are Christian athletes. Case joins a very long line of talented athletes that I'll be keeping an eye on when opening packs or browsing nickle and dime boxes at my LCS or at a show.

I recently came across his 2012 Topps Magic RC for a few quarters. I may or may not already have this card, I'm not sure, but I loved the Magic football sets that Topps put out in the early 2010's. I knew Case had been a journeyman of sorts, but I had no idea that Houston drafted him.

Here I thought the winter months would bring me more downtime to blog and take care of other hobby related things and my last post was 3 weeks ago. So much for "downtime"! I did however want to take advantage of my last day of vacation before heading back into the work week to look back at the previous year like I usually do. 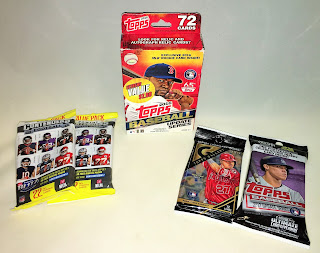 Before I look back at the year that was, let me take a moment to share my card related gifts from Christmas. Now I have to be honest here and say my wife bought and wrapped for me the rack pack of 2017 Topps Update. I bought the clearanced box of 2016 Topps Update, 2017 Topps Gallery and one pack of 2017 Panini Playoff Contenders and put them in my own stocking! I grabbed the other pack of Contenders while in Charleston, SC with my wife as we celebrated our 13th wedding anniversary.

2017 was a great year for me. I got to take in several professional games, something that I don't always have the chance to do. Back during the summer my wife and I got to take in two games in one weekend at the Braves new home, Sun Trust Park. What a beautiful ballpark to visit and soak up a few games. 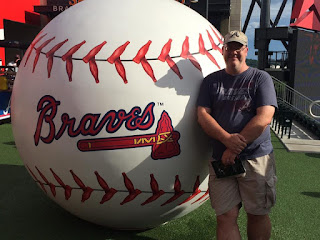 Too bad the Braves on field performance fell short (of the Playoffs, not expectations). I did feel that going into the new season that the Braves would have performed better, after all they signed a few veteran starters in the offseason (Bartolo Colon and R.A. Dickey) to help anchor the rotation that had a lot of question marks. Dansby Swanson struggled and was demoted to AAA at one point, however Ozzie Albies got the call up late in the season to make it interesting to watch none the less. Then of course there was the scandal with the Braves front office that led to a shakeup with the general manager and other moves. I guess I'm more concerned about hte future of the team with the players they lost because of the rules they broke. None the less, we should see the young phenom Ronald Acuna in Atlanta, very, very soon! 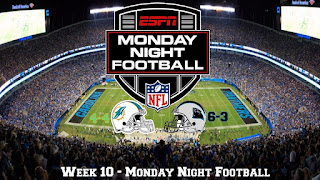 Back in November I attended a business conference and trade show in uptown Charlotte and my employer treated us to the Panthers vs. Dolphins Monday Night football game. I hadn't attended an NFL game in many, many years so even though it was cold and I was sitting in the nose bleed section, it was a great time. The NFL regular season is over and my Panthers have limped into the Playoffs as a Wild Card. We were swept by the Saints during the regular season, but have a chance to get our revenge against them this upcoming Sunday. If they can make it past the New Orleans, an injured Eagles team waits in the 2nd round. So far this has been a good season for the team, despite the ups and downs we've had with injuries and Cam Newton's play at times.

On the card front, I don't feel as if I accomplished as much in 2017 as I have in past years. I pulled back on some of the set building I've done in the past, only focusing on the flagship Topps set (even though I slacked with series 2) and somewhat with Allen & Ginter and Stadium Club. This marks another year I didn't buy even one hobby box, choosing to stick to retail for my card needs. 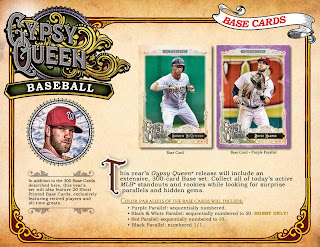 I even ignored Gypsy Queen for the most part, something I haven't done since it's inception. I find this odd/funny because when it was announced that 2017 GQ was going to be less expensive and have less "bells & whistles" I was all jazzed. Then it was released and I only mustered up a few retail packs.

I did noticed that from a post count, 2017 makes the most I've blogged since 2013...and here I thought I dropped the blogging ball this year. I am behind on getting want lists created for sets I am working on, as well as actively looking to help others fill their holes in their collection with trades and what not. I did receive a few surprise packages from fellow bloggers over the last few weeks. A huge thank you to those who sent me cards. I always try to post and share what others have sent and I do plan on doing so when time allows. 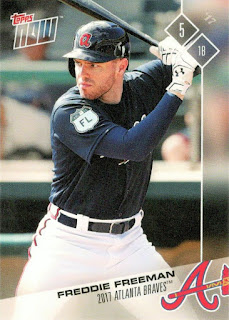 While my single card purchases decreased during the year, I have a ton of 2017 Topps Now cards that I never got around to scanning and posting about. At this point I question if I should even bother putting them on the blog. Does anyone care at this point now that 2018 Topps flagship is right at a month away from being released? I did have some fun w/ the Topps Bunt (and Huddle) app and have routinely posted new digital cards of both sports to my Facebook page. Like others though, I'm still behind on scanning other new card purchases and getting that overall organization down. I hate all the random stacks of cards on my office desk. I bought a lot of stuff from BCW last Christmas to get myself organized and while I made some headway, I still have a lot of work to get totally organized.

All in all 2017 was a pretty good year to me. I do look forward to 2018 and what it holds for me and my teams (Panthers in the Super Bowl again?). I haven't researched much of what Topps and Panini have planned for the new year so I guess I'll just have to wing it moving forward. I hope that the blog can remain just as alive (if not more) in 2018. Thanks to all my fellow bloggers for the comments, trades and continued support.
at 9:59 PM 1 comment: