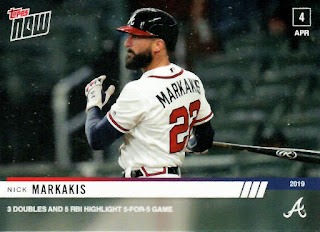 Finally found the time to post my first 2019 Topps Now card of season. When this season started I really didn't know what to expect from this Braves team. There were a lot of questions going into the season, especially with starting pitching and the bullpen. However there was one thing you knew you'd get out of Nick Markakis and that is consistency. It didn't take Nick long to show why he is still a valuable part of this team. April 4th he went 5 for 5 with 3 doubles and 5 RBIs against the Chicago Cubs.

Topps Now cards have been pretty slick looking since their inception and this year is no different in my opinion. However they cards look so much better in hand. I guess it's the rainbow sheen UV coating on the cards that make them hard to scan. None the less I will be picking up the other Braves cards commemorating on field highlights as they are released.
at 4:41 PM 2 comments:

A first for this blog...

Growing up in the south I've never really been exposed to (ice) hockey so I've not paid much attention to the NHL before. When the Carolina Hurricanes won the Stanley Cup awhile back, I did peek at a few games to see what the fuss was all about, but that was about it. Fast forward to the 2019 Stanley Cup Playoffs and I've watched several Hurricanes games and while I don't know what's going, I've enjoyed them immensely. So much so that I grabbed a fat pack of 2018-19 UD Series 2 last week while I was traveling for work. Let's rip it and see what I got. 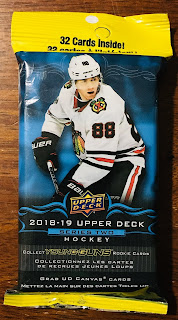 32 cards for $4.99. Gotta admit it was fun opening an Upper Deck product again. It's been a long time since I've opened anything UD. 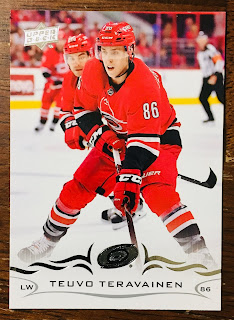 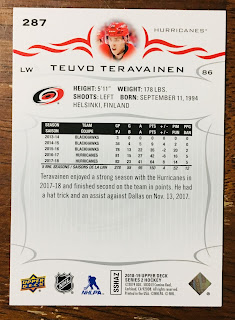 This wasn't the first card out of the pack, but it was the only Carolina Hurricanes player I pulled. Overall I dig the design. Full bleed photo with a a minimal design. The team logos are all silver foil so with me not being too familiar with the various teams I wasn't easily able to identify the teams because of the foil. 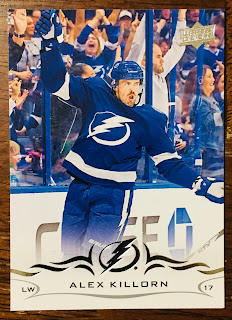 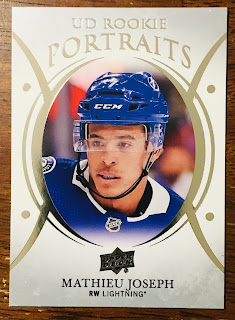 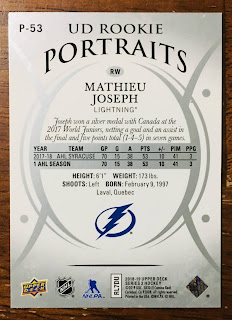 This insert was seeded 1:6 packs. Can't say the design does much for me. When I see the word portrait I think more of a posed shot and not a cropped action photo of the player. 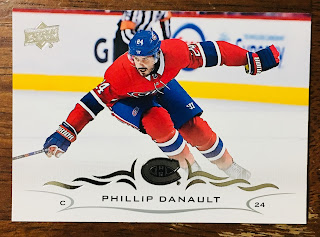 Nice horizontal action shot. Only saw a few a horizontal cards in the pack. I like these as it shows off UD's great photography. 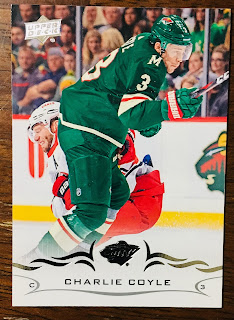 Here I can see a Carolina player getting taken out!

While I don't plan on starting a Hurricanes collection, I do think it would be cool to pick up a few cards from this years team. That said, if anyone wants any of the cards listed/shown just let me know. If you have some 'Canes you can send me I'll gladly trade for them.

It was fun opening the pack, reading the card backs and just soaking in the photography. Opening a pack of Upper Deck really makes me wish they still had a MLB license...but sadly I don't think we'll ever see that happen again.

I hope you enjoyed this post as much as I did creating it. Now, back to our regularly scheduled non-hockey card posts...
at 9:29 PM 5 comments: