Here it is in late June and I'm already seeing 2015 NFL trading card sets hitting the retail shelves at my local Target. My curiosity usually gets the best of me and I end up grabbing a pack of the newest cards. This time it would be 2015 Bowman and 2015 Score. However instead of doing my usual "Pack Break" type post, I thought I'd try something different...

Let's take a look at each product and then compare it to the other brand and see which is the better buy. Sound simple enough? 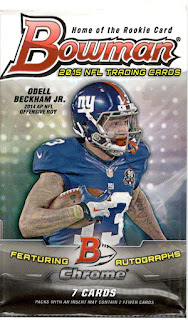 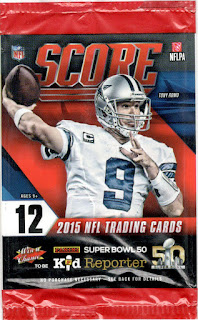 Before we even tear into the packs you can already see that Score is coming out a head with 5 additional cards and being a $1 cheaper per pack. If my memory serves me correctly however Score football packs used to come in at a buck a pack, so perhaps 2015 Score has upped their game? 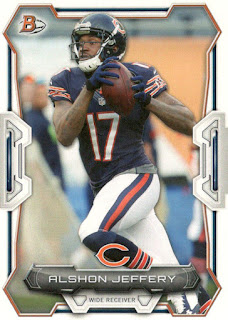 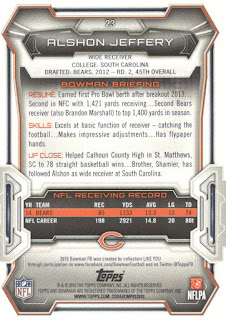 The base design Bowman chose to go with isn't bad, but to me it's awfully busy. The lack of foil on the front is a nice change of pace, however I could do without the design block thingies on the sides.

The backs are typical Bowman fare. Resume, Skills and Up Close sections give you some insight to the player. Underneath you have last year's stats. That's about it. 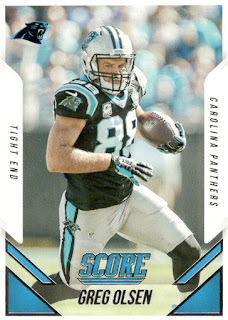 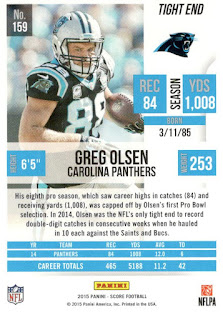 Score again decided to go with a team color coordinated design and added silver foil. While I don't always care for foil, if it's used in moderation I don't mind it. Because this is a change for Score over previous years, I like it. The design doesn't impede too much on the photo which I like.

The backs use the same picture from the front, seems lazy to me, but Bowman doesn't even bother to put a photo on the back. Small write up of the player, last year's stats. Simple, but clean look. 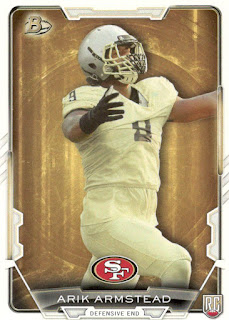 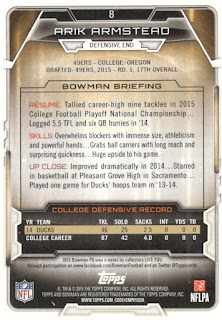 The last few years it seems as if the rookie cards in Bowman have this awful, drab look. Well that boring look is back. I can deal with the collegiate uniforms, but since Topps doesn't have the proper license they have to air brush out the logos like Panini has to do on their baseball cards.

The backs use the same design as used for the veterans. 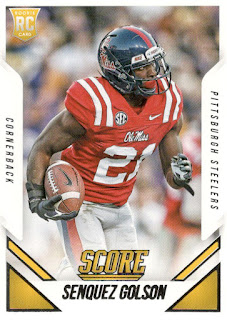 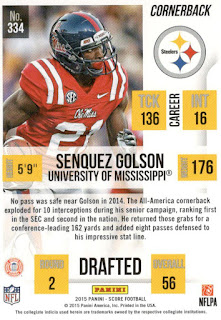 Panini does have the collegiate license and I think it makes a big difference. The base design is basically the same as it is for the veterans, however you have the RC logo in the corner that Panini started using a few years ago.

The backs remain unchanged as well from the veteran design, minus the stats. In their place is the round and number pick they were drafted. 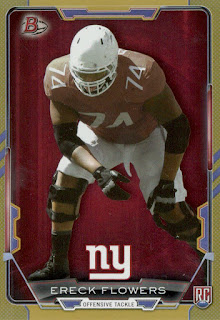 Parallels come in a rainbow of colors and I just happened to pull a red parallel of Ereck Flowers. If it weren't for the serial number on the back, I wouldn't have known this was a parallel as it has that same boring look the RCs have. 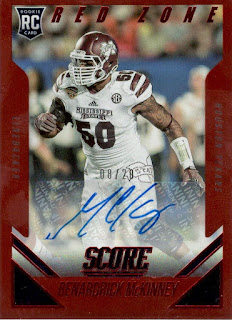 Well what do we have here? A Red Zone Rookie Autograph parallel of Bernardrick McKinney! While not quite the same kind of parallel when compared to Bowman, you get the idea. Same design, just the border has been replaced with red foil. I'm kind of partial however to different colored border parallels over different colored background parallels. 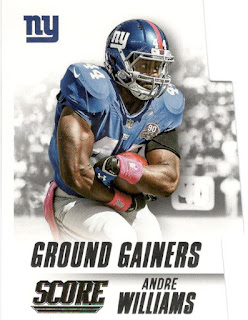 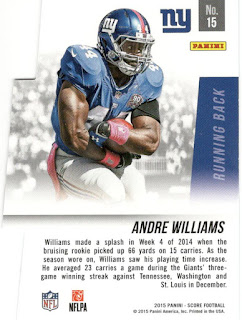 Well this comparison will be lopsided as I didn't pull a insert from the Bowman pack.

This Ground Gainers card is actually die cut, though with the white background it's hard to make out in my scan. Basically the card looks like a corner puzzle piece. I'm guessing there is some sort of aerial type counterpart card that "fits" onto the other side? 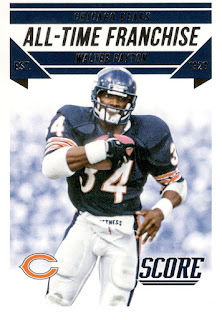 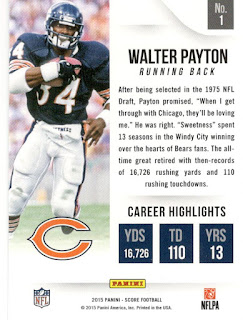 At first I thought this was a subset for the base set as I already pulled an insert from the pack...but it's another insert. Not my favorite design, but at least they are pulling in some history to the set with some retired players. 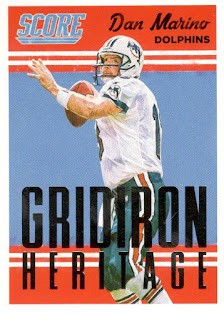 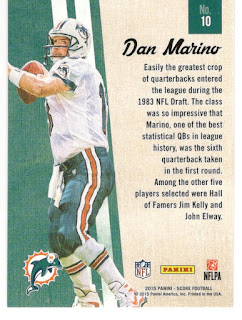 The last card in the pack of Score was yet another insert, Gridiron Heritage. I like the slightly retro look of the card. It fits the theme of the set quite well, both in design and player selection.

Well it doesn't take a genius to figure out that I think 2015 Score easily topples 2015 Bowman. Perhaps the flagship Topps football would have been a better suitor to compare against Score, but it'll be another month or so before Topps has their base set ready.

As I mentioned earlier, Panini has really upped the quality of Score this year. It was a pleasant surprise for me and I found opening the pack was fun. Panini also has a contest going in each pack of Score football where you have a code to redeem online where a child over the age of 7 and their parent can win a trip to the Super Bowl 50 and be a "Kid Reporter"!

I should make mention that I'm basing my winner based on the 2 packs I opened. I haven't looked online at the checklist, insert ratios or anything else about each product. Heck, I didn't even know the 2015 NFL trading card season had begun until a few days ago when I grabbed these packs! No matter which pack of cards you pick up, it's just nice to know that the new NFL season is just a few short months away! 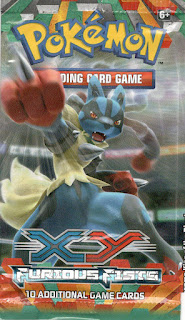 It's been awhile since I've put anything on this page, but here I am with a little something different this time around.

I'm not sure how it happened, but my 3, going on 4 year old daughter, Winnie, has taken a liking to Pokemon. She would watch it every morning on Cartoon Network while I'd get ready for work. Now she watches it on Netflix whenever she can. So the other day while at Walmart I decided to grab a booster pack of Pokemon X/Y cards for her.


I wasn't sure if she'd even care, but I was thinking about making a trading card album for her upcoming birthday next month. Turns out she did like them. Wasn't crazy about them, but enough for me to at least move forward with my gift idea.

I haven't opened a pack of Pokemon cards in years. Though there was a time where I enjoyed picking up packs here and there. I played the Game Boy games so I was familiar with a lot of the characters, but never took the time to learn how to play the trading card game. Did anyone actually play the game or did everyone just collect the cards? Well regardless of that I grabbed a pack from the X/Y series called Furious Fists. Now I couldn't tell you the difference between all the different themed packs they had to offer, so I just grabbed one of the cardboard pouches that had one of the Pokemon I knew my daughter recognized.

Truth be told it was fun opening the pack with her, watching her face light up when she saw some of the characters she saw. Well since it's been awhile I thought I'd share the contents of the pack here. After all, this blog is all about cardboard, not just baseball! 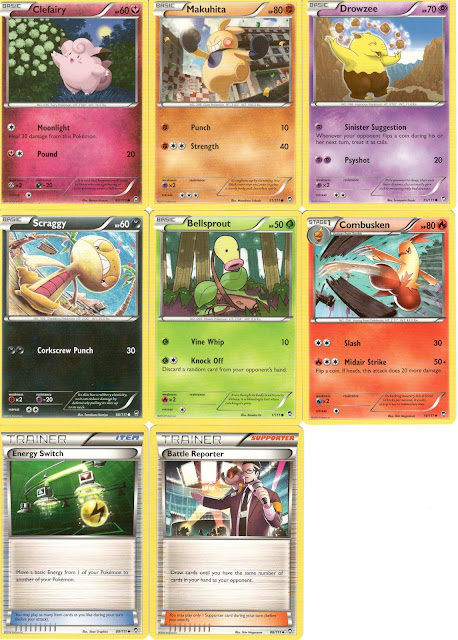 These booster packs contain 10 cards and will cost you around $4 and some change, depending on the retailer. Like a lot of the modern trading cards games (i.e. Magic), the packs come packaged in cardboard pouches. I wonder if this contributes to the high price? There aren't any real odds on the packs of pulling a special card or anything, but I remember pulling Holofoil cards back in the day and being the subject of envy in your neighborhood or school yard.

With my knowledge of the games and watching so many of the episodes with my daughters, I knew most of these characters...and so did my daughter. I thought it was funny when she looked at the two Trainer cards with a puzzled look on her face...like "what are these doing in my pack daddy?". 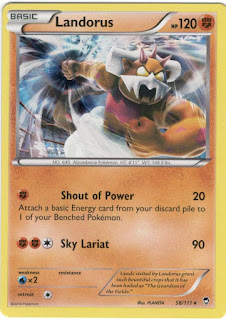 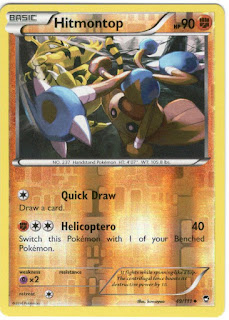 She ended up pulling two Holofoil cards in the pack...and that really made her face light up! The Landorus card looked like the Holofoils that I remember. Just the image itself has the rainbow sheen. The Hitmontop card however is different. The whole card features that special rainbow shine. I don't know what those are called (is it Reverse Holofoil?), but again she was happy with the cards.

Neither of my daughters care too much for sports. in face my oldest just told me to turn down volume down on the TV as she didn't want to hear the boring Braves game I've got as I type this at the kitchen table! However my daughters are starting to like a few more things that daddy likes and anytime that take interest in trading cards or anything else daddy likes, my heart skips a little in excitement.

Now if you'll excuse me, we've Gotta Catch 'Em All!

I don't necessarily think of heavy metal music when it comes to the sport of baseball (or baseball cards), although I do seem to remember Trevor Hoffman of the San Diego Padres coming out of the bullpen to AC/DC's "Hell's Bells".

Well in 1996 Leaf decided to shake things up with a their Preferred set of cards. While the base cards weren't anything special, there was a 77 card set printed on metal...or steel if we're being accurate. It wouldn't be until 1998 that game used cards would be introduced to the world of card collecting, so metal baseball cards really stood out...or at least they did to me. Like many of Topps' Refractor cards that came with a special coating that you could peel off, these Steel insert cards featured the same thing. I opted to peel them as they look way better naked.

The 90's were my heyday of collecting and I had many of these 1996 Leaf Preferred Steel cards, however I was never able to amass very many. A few years ago I decided to stop set building and focus more on insert sets and things I liked. I've always liked cards that were made of something other than cardboard so I put this set on my collecting radar. After several years I finally found a rather decent size lot for a very generous asking price so I jumped. Now that I've finally had some time to get then scanned, it's time to share them off. I've also updated my respective Want List to reflect what is left of the 77 cards to finish off the set. I also ended up with several doubles from this lot so if these interest you make sure to check my Trade List! 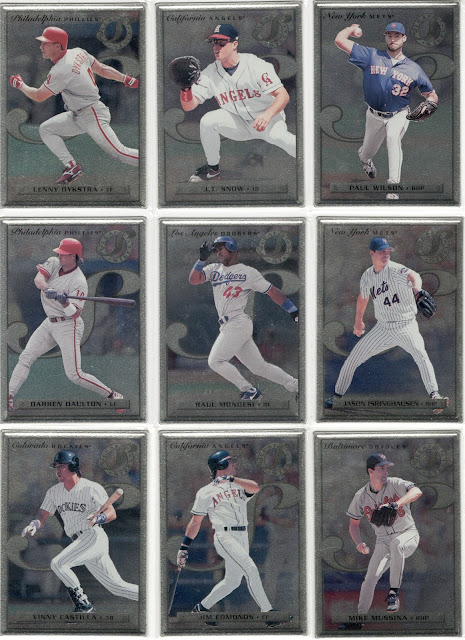 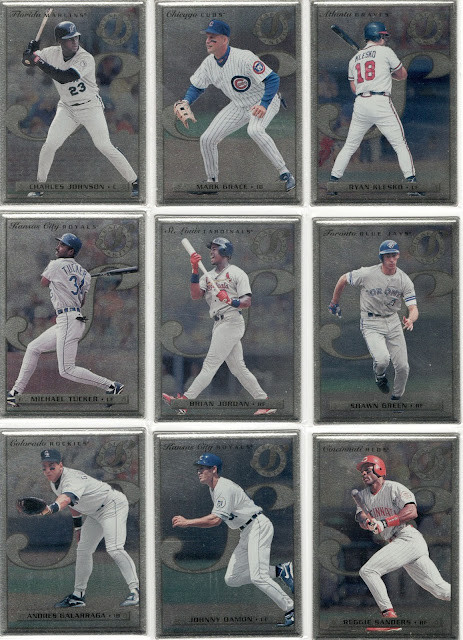 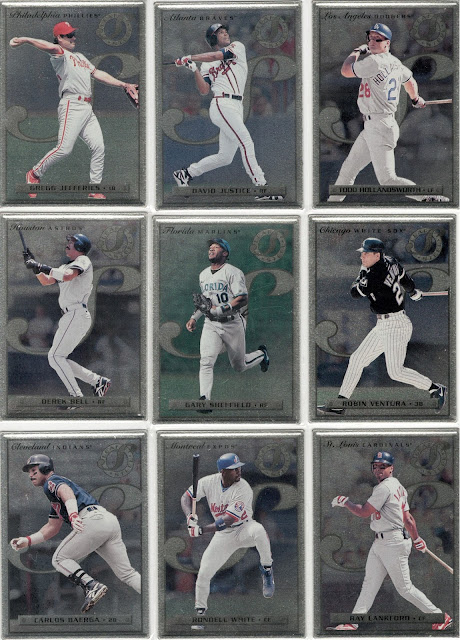