Like many card collectors, I have been trying to be more active on Twitter over the last few months. As a result I tend to forget that not everyone that may stop by my blog is also on Twitter. While I have shared some of the pictures of the cards we pulled as part of last weekend's Charity break, I realized that many of you may not have seen them. Time to get that resolved.

First however, we collectively raised $150 for my friend Nick Dusenbury's adoption fund! Thank you again to everyone that participated, especially to those of you that donated above and beyond the entry fee. I'll be making this donation to Nick's Go Fund Me campaign early next week once I get paid. Now, onto the cards... 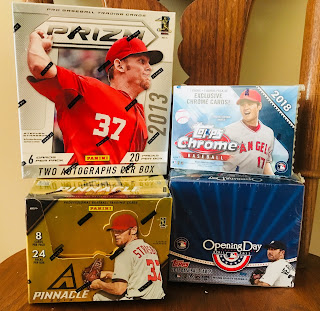 The break included Hobby boxes of 2013 Panini Prizm and Pinnacle, a box of 2012 Topps Opening Day and a bonus blaster of 2018 Topps Chrome. 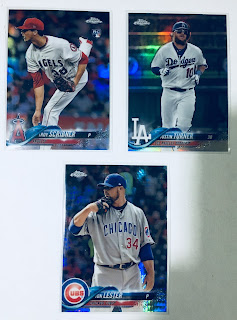 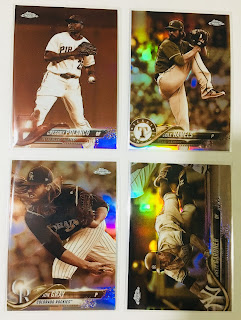 We ended up with 3 Refractors, the Jon Lester having a different look than the others. Xfractor? Does Topps still do those? The blaster box had a pack of 4 retail Sepia Refractors and I was surprised at how sharp those looked. 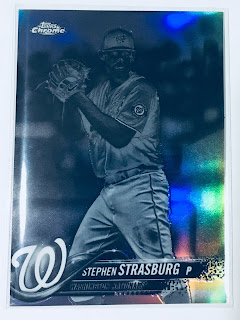 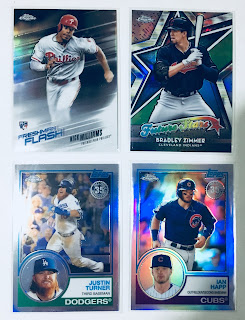 The Reverse Negative Refractors also looked very sharp...too bad it was a Nationals player!! We also ended up with 4 other inserts. The Freshman Flash don't do much for me and the Future Stars, while they look better in person than scanned are another easy pass for this collector. The 1983 Retrospective cards are beautiful. 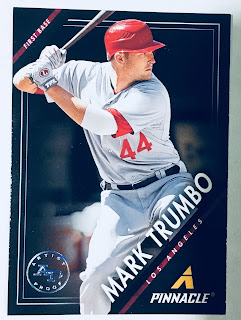 Up next was the box of 2013 Pinnacle. I was really looking forward to this one personally as I loved the Pinnacle brand back in the 90's and this new design harkened back to Pinnacle's beginning. We ended up with one Artist Proof parallel...nothing fancy, but nice to see that particular parallel again. 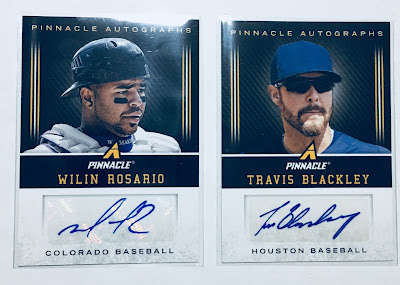 The guaranteed two autos in the box I don't think knocked anyone socks off, but hey...it was for charity!! It did appear that there was a small cut out for the auto sticker however. 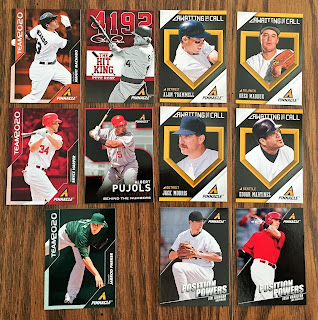 There were several other inserts pulled, such as Team 2020, Position Powers, Awaiting the Call and even a Pete Rose insert? 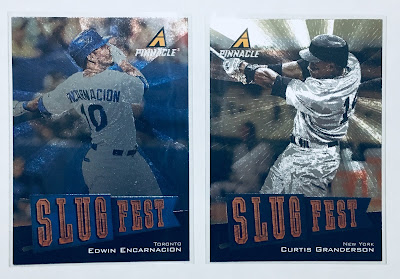 Pinnacle was known for their "Dufux" technology and Panini also brought this back (though they call it something different now) and used it on the Slugfest insert...another familiar name from back in the 90's. 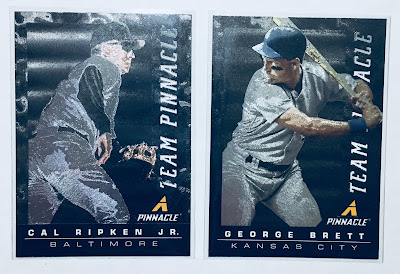 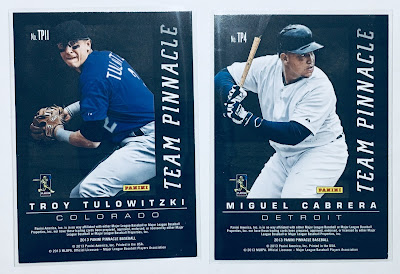 The Team Pinnacle insert features two players, but only the player on the front side got the fancy upgrade. This was yet another Pinnacle staple from yesteryear. 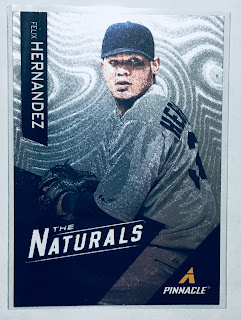 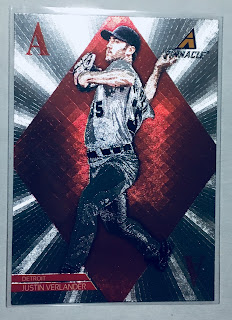 The Naturals and Aces were the other insert set subjects pulled. I was glad to pull this Verlander as the Sewing Machine Guy, Larry French himself came out of "retirement" to help out the cause and grabbed his Tigers. I believe these are going to his nephew if I recall correctly. 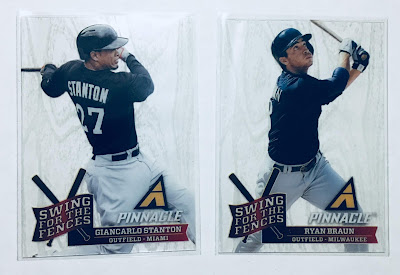 One of the aspects I really liked about the renewed Pinnacle was their inclusion of acetate inserts. These Swing for the Fences cards have a pseudo wood grain look to them, though it's hard to see against this white background. 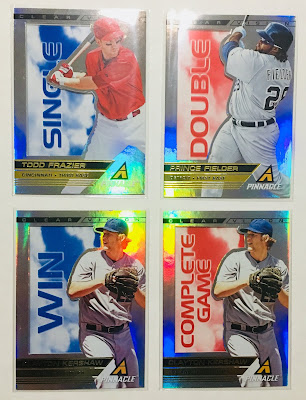 The Clear Vision cards are awesome in my opinion. You've got a shiny rainbow foilboard boarder along with colored acetate in the center. As you can see w/ the Kershaw, there are multiple versions to chase. 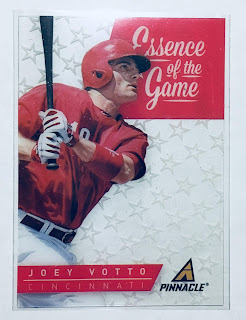 Essence of the Game is another card that looks better in person than scanned. Not my favorite design, but cool none the less. 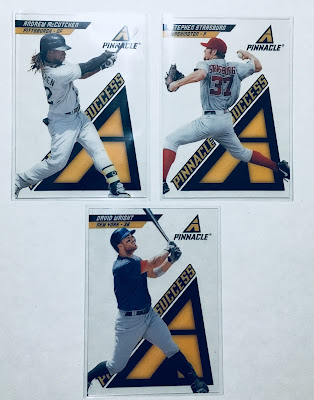 The last insert of the Pinnacle box are these Pinnacle Success acetate cards. I'm a fan of baseball cards made of something other than cardboard so these are a win in my book.

All in all, for a non-licensed set I found the Pinnacle box to be the highlight of the break just for the sheer variety it offered. Perhaps another box will show up in a future Affordable Group Break? 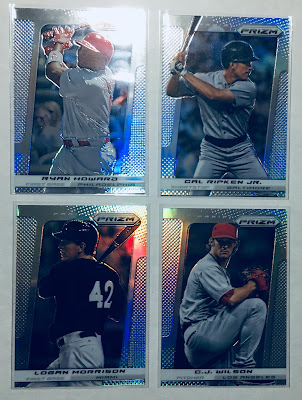 Up next was the box of pre-Optic cards, 2012 Prizm. We hit 4 Refractors, I mean Prizm parallels. I love the thick cardstock used for these and wish Topps would up the stock used for Chrome. 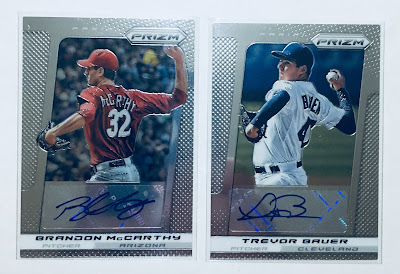 The two guaranteed autos this time around where a little better. At least I've heard of both of these players. Just heard this morning as a matter of fact that Brandon McCarthy is calling it quits and hanging up his cleats at the end of this season. He currently is an Atlanta Brave and is on the DL. 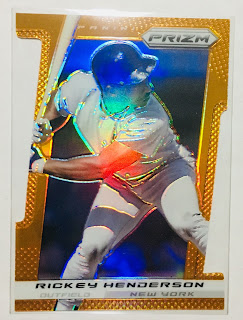 These orange die-cut Prizm parallels are Hobby exclusives and numbered to 60. Happy that we got a good player this round in Rickey Henderson. 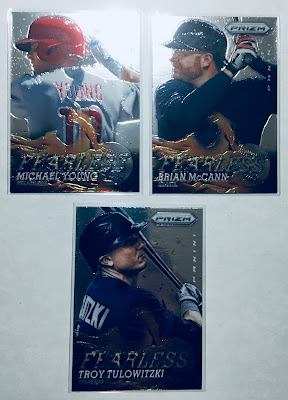 These Fearless inserts I felt could have looked better, but as a result are kind of bland to be honest. Maybe if the flames had been done in the rainbow sheen they would've looked better? 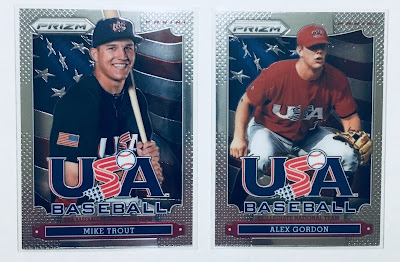 Hey, that kid on the left looks kind of familiar. Usually I'm not a big fan of Team USA stuff, but hey when Trout is on the card how can you go wrong? 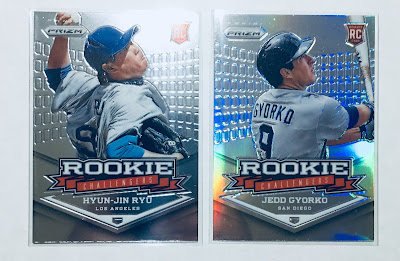 I wasn't aware going in that the inserts also had parallels until I pulled these Rookie Challengers. The design itself is pretty bland, but at least the Gyorko looks better since it's shiny. 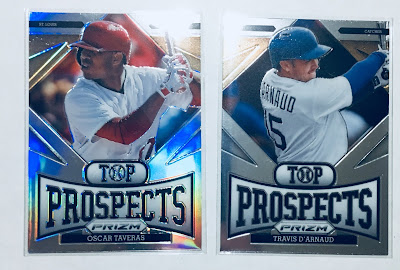 Same thing, but this time with Top Prospects. Got a regular version and a shiny parallel. 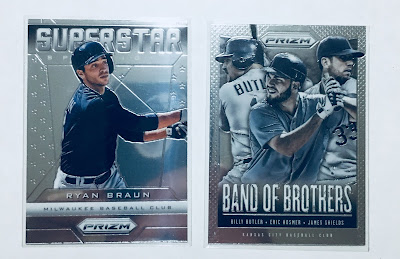 I have to say the Prizm was better than I expected it to have been. The Prizm shiny cards all look great in hand and as previously mentioned, I love the thick stock used. None of the cards curled or stuck together.

I didn't open the Opening Day box on camera to conserve time as I was already over the one hour mark by the time I got to it. We pulled the normal Mascots, Superstar Celebration inserts as well as a few others. I was in a hurry to get everyone's cards sorted, packaged and mailed Monday morning that I didn't take any pictures of the Opening Day cards, but if nothing else it helped add more cards to every team's stack.

Overall it was a really fun break and I hope everyone enjoys the cards that were pulled for their team(s). Thanks again for all of the support! Until next time...
at 11:00 PM