It came from Arlington...

The other day I received a package from the great state of Texas...Arlington to be exact. I don't know why but when I saw the return address I immediate thought of King of the Hill. 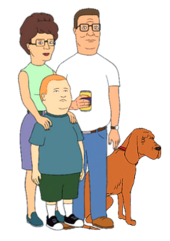 Kin of Bean's Baseball Card Blog (@beansbcardblog) recently held a sale on his YouTube channel and I dropped by to see what all the hoopla was about. Turns out Kin had some really nice cards for a quarter a piece. I first asked what Carolina Panthers cards he had and as he was thumbing through them I found several I wanted.

2000 Collector's Edge Supreme Hologold parallel
Tshimanga Biakabutuka...man I love saying his name aloud. Tim's career in Carolina was cut short by injuries, only playing 51 games over 6 seasons, 35 games as a starter. He's one of those players that I often play the "what if" game. 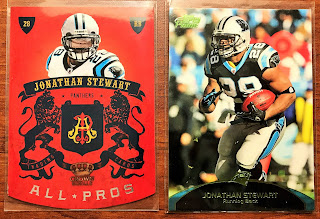 2010 Panini Crown Royale All-Pros / 2011 Topps Prime Aqua
From one Panthers running back to another, Jonathan Stewart is one of my favorite Panthers players. Not only did he impress me with his skills on the field, but his character off the field was just as impressive and made me even more of a fan of his. To date he's one of the few football players that I'll chase more than just base cards of.
I'm a sucker for die-cuts and certain parallels so both of these cards were easy pick ups. While I like what Panini has done w/ the NFL license, I'd be lying if I said I didn't miss Topps in the football card market. 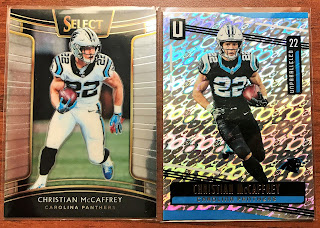 2018 Panini Select / 2019 Panini Unparalleled
If we are talking about Panthers running backs we have to mention Christian McCaffrey, right? His stardom in the league has carried over to his cards so I don't have a lot of his cardboard. Anytime I have the opportunity of adding new cards of McCaffrey to the Panthers collection I'll jump.
After getting the Select card in hand, now I want the Prizm parallel (is that what it's called?). The Unparalleled cards are a little busy, but remind me of the old Pacific Prism baseball cards. 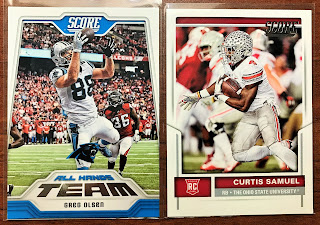 I really miss Greg Olsen playing for Carolina. Not only was he a good blocking tight end, he was also a phenomenal pass catcher. This 2018 Score All Hands Team captures his ability perfectly. From a year earlier we have Curtis Samuel's Score RC. I was big on him coming out of college. I still remember the local news stating that on the first day of training camp at Wofford College in Spartanburg, SC, Curtis' mom dropped him off! While his first few years in the league have been up and down, I love how Coach Rhule and his staff have been using Samuel. Surprisingly I didn't have this RC...now I do! 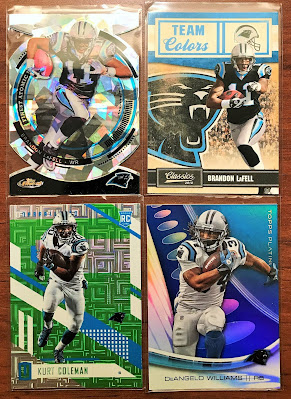 These 4 cards I grabbed just because they stood out. Starting with the top left, 2010 Topps Finest Brandon LaFell Finest Atomic Rookie. Shiny and die-cut! We also have his 2010 Panini Classics Team Colors...just love the look of the card.
To the bottom row, left we have a 2017 Panini Unparalleled Kurt Coleman Lime Green Escher Squares parallel. What stood out to me about this card was the inclusion of the RC symbol. Kurt's first year in the league was back in 2010 with the Philadelphia Eagles so I have no idea what Panini was thinking! Next is a 2013 Topps Platinum DeAngelo Williams. I think this is a parallel of some sort, but I can't quite identify this...still a nice looking card. 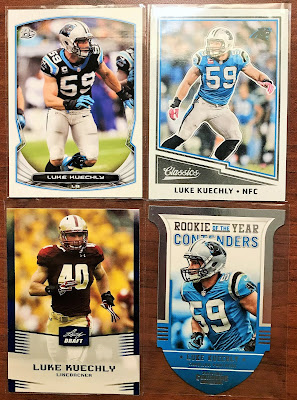 The last of the Panthers bunch is Luke Kuechly. Before Luke hung up his pads there were many a Sundays in Charlotte, NC where you could here chants of "Luuuuuuuke" being rained down from the stands. It was a black day in town when Luke stepped away from the game...another player that had to call it an early career due to the violent nature of the game.
I didn't have any 2014 Bowman cards prior to picking up this Kuechly. The 2017 Panini Classics card looks like a great set. The 2012 Leaf Draft set isn't the best looking, but for a quarter why not? Lastly we have a nice looking die-cut 2012 Panini Contenders Rookie of the Year Contenders insert. Easy purchase!
Next I asked Kin what Braves he had. He thumbed through quite a stack and I was surprised I found as many as I did. 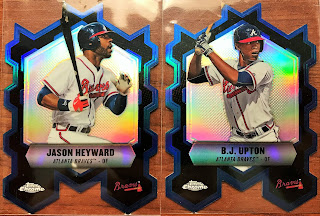 2013 Topps Chrome Jason Heyward & BJ Upton Chrome Connections
I'm not sure I've even seen these die-cut Chrome cards before so they were an easy pick up, even if one of them was BJ Upton! 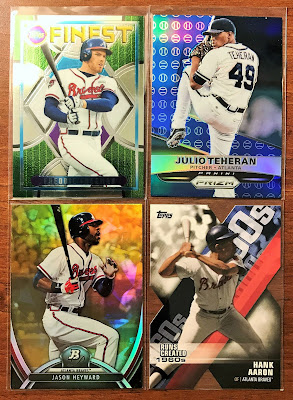 We have more shiny and die-cut cards in this lot. First its a 2015 Topps Finest Freddie Freeman base, then a 2015 Panini Prizm Julio Teheran Blue Prizm parallel. On the bottom row: 2013 Bowman Platinum Jason Heyward Gold parallel, followed by a 2020 Topps Decade of Dominance Hank Aaron die-cut insert. 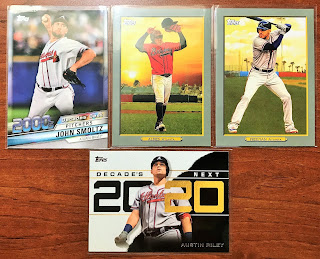 The last batch of Braves cards all come from 2020 Topps. John Smoltz Decade's Best, Ozzie Albies & Freddie Freeman Turkey Red and finally a Austin Riley Decade's Next insert. With finding baseball cards in 2020 being such a chore I was glad to pick up a few cards of my team.
I really appreciate cheap sales such as this. I'm not sure if Kin is planning on doing anymore sales like this, but if he is you gotta jump on in and see if he has anything for your favorite team(s).
at 10:32 PM