Looking over my post history for 2016 is a quick reminder of just how busy I was...or was it that blogging about cards lost some of it's appeal. Or was it a little of both?

I'm still not able to put a finger on it, but regardless a new year is upon on so why not take a few moments to look back at the past year...and share some images of cards I've picked up, but never posted about. 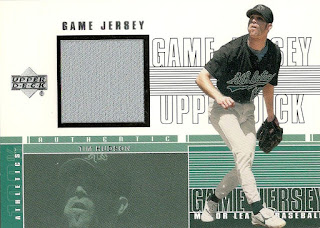 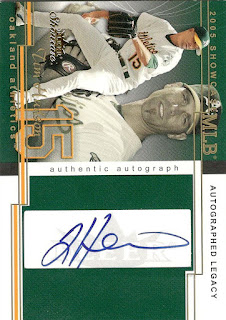 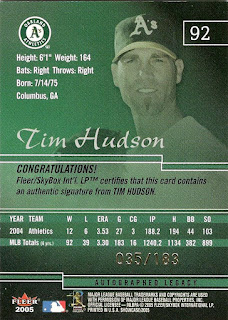 Maybe it's just me, but it seems like my player collections keep changing. I tend to pick players that don't always get a lot of cards or the players just drop out of the limelight all together, but one guy that I've stayed with is Tim Hudson. I have a good many of his cards already, but I'm amazed I keep finding cards of his that I don't own...especially cards of his pre-Braves days. Tim isn't going anywhere and I look forward to resuming my search for his cards in 2017. 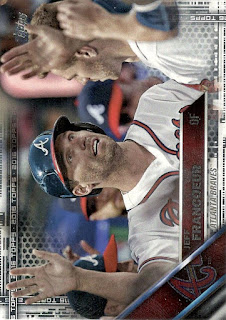 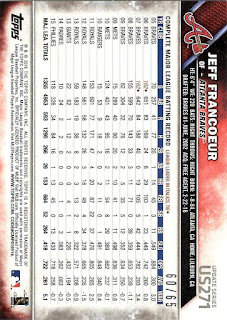 The 2016 Braves may not have been the best team the club has assembled nor did they have the success I'm sure they were wanting, but one good thing did become of the season. Frenchy. When he signed the minor league deal during spring training I was beside myself. However I really didn't think he had a snowball chance in Hell to make the team. I was glad I was wrong. Early in the 2016 baseball card season I had to settle for cards of Francoeur in an ugly Phillies uniform, but towards the middle of the season Topps finally corrected this and issued a few proper cards of him in a Braves uniform. I was glad to have more cards of his to chase, especially trying to complete the rainbow of his 2016 Topps Update card seen above. I believe I'm still lacking the pink parallel to finish off the "set". 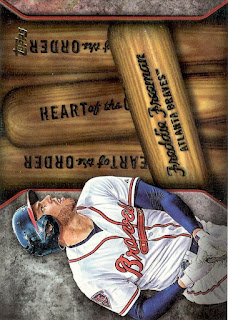 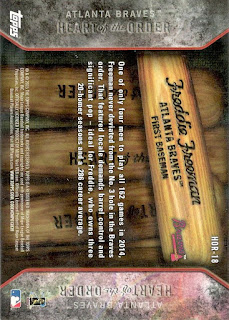 Freddie was back to his normal form in 2016. He was just as much fun to watch as ever, especially now that his eye sight issues that plagued him in 2015 seem to have been corrected. It was also fun following his journey becoming a dad for the first time during the season. After the Braves shipped Hector Olivera off to San Diego in exchange for Matt Kemp, Freddie was finally given a good power bat in the line up to compliment his game. The Braves may have not had the success they wanted, but they seem to be heading in the right direction and I'm glad that Freeman continues to be leading the way. 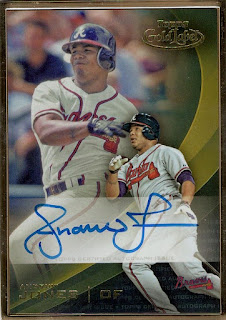 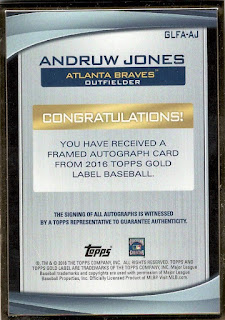 It seems as if you can always find new cards of your favorite players, even if they aren't playing the game any longer. I recently picked up this metal gold framed auto of Andruw Jones for about $5. These cards are much more beautiful in hand than they appear when scanned. 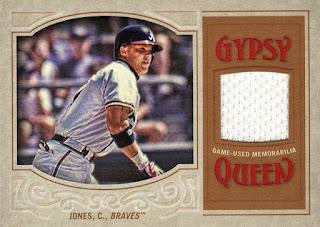 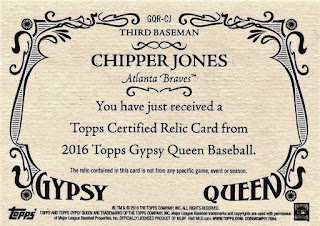 I don't actively seek out Chipper cards, but I pulled this GQ relic from a blaster while working on completing my 2016 GQ set (which I still need to do). 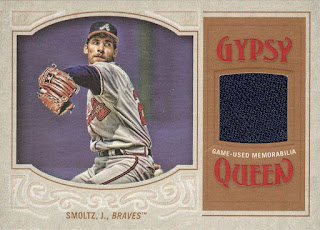 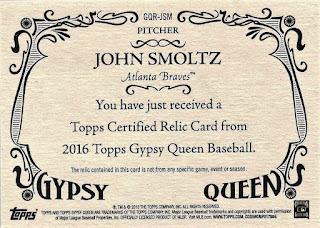 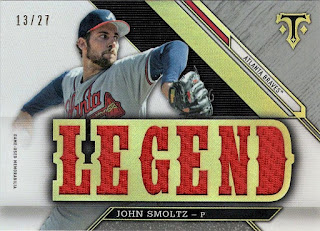 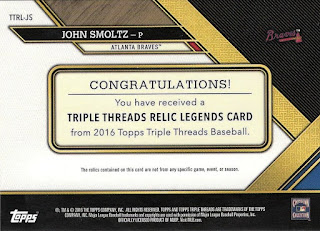 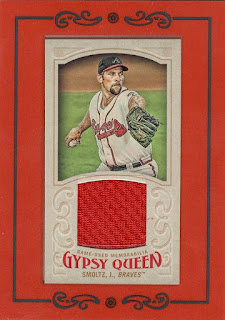 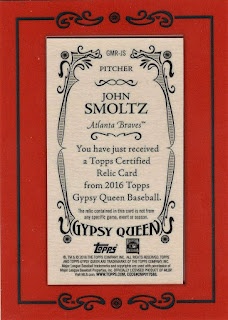 I will seek out new cards of Smoltz however and I was glad to pick up these relics. I don't normally bother with Triple Threads, but this particular one caught my eye and the price was right.

Do you like the fact that Topps (and even Panini) are still mixing in retired players into current product checklists? 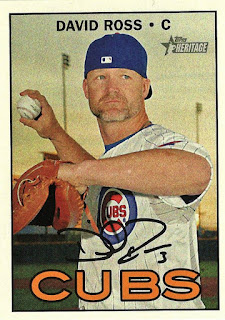 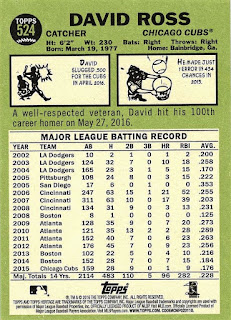 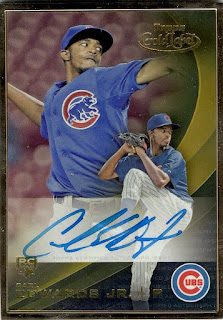 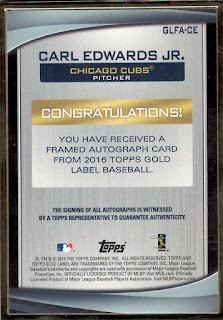 How can you talk about the 2016 baseball season and not bring up the Cubs. While I'm not a fan of the team, I was glad to see David Ross pick up a World Series ring. In the aftermath of the Cubs win I did manage to pick up a few Cubs cards of his before he rode off into the (retirement) sunset.

During the said Cubs World Series win aftermath, I found out that the Cubs reliever, Carl Edwards, Jr. was from my hometown of Charlotte, NC. I don't always actively collect cards of players from my hometown or from NC, but I found myself with yet another beautiful Gold Label auto. I'm not sure if he'll gain a spot in my PC, but it's still a nice card to own none the less. 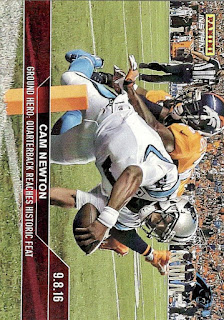 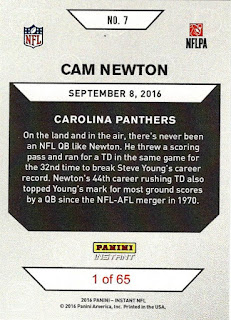 After the Braves season ended I was all ready to shift my focus to the NFL and my Carolina Panthers. The 2015 season fell just one win short of being magical, so I and many other fans thought we may be able to recreate that same magic in 2016. Wrong. 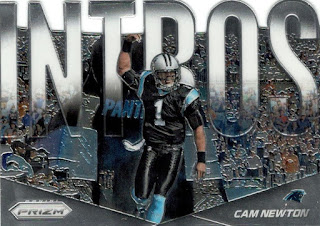 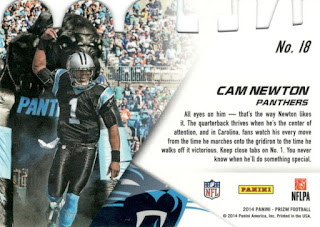 Why does everyone love to hate this guy? I've seen countless number of videos of Tom Brady, Aaron Rodgers, Peyton Manning, Drew Brees and others throwing tablets, cussing up a storm on the sidelines and throwing their own versions of temper tantrums...yet the media acts as if Cam is the only one that is so emotional playing this game. While I won't and don't defend Cam 100% of the time, I do get sick and tired of the double standard.

Does Cam need to work on his mechanics in the off season to improve? Definitely. Is he a bad QB? Heavens no! Some fans say the Panthers should cut him. I wonder how many other fanbases would love to have Cam as their QB. The 49ers? Rams? Vikings? Eagles? Jets? Whatever the problem was for the team and for Cam, I hope they are able to work on it in the off season. I hope that the team management is able to take some of that cap money they didn't use in 2016 and go and sign some good veteran free agents to help solidify the offense line. Go draft some much needed young guys to fill in the holes on this team. 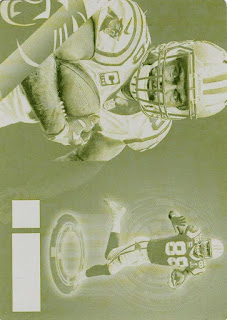 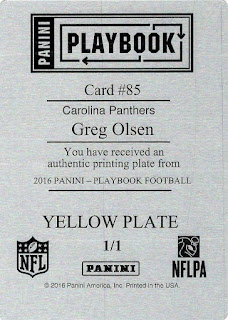 Regardless of the teams performance, I still sought out new cards at different times throughout the season. When your team isn't playing hard it's a little harder to get excited to hunt for new cards, but this printing plate of Greg Olsen is one of the best cards I picked up all year. You couldn't tell from that guy's play that the team had a 6-10 record. BTW, congrats to Greg for becoming the first TE in the NFL to record 3 consecutive seasons with 1,000 or more receiving yards.

I let a lot of things slide in 2016 and I plan on fixing those things in 2017. I have a lot of sets that I've never finished collating, yet along made lists for. I slacked off of trading and I'd like to get back to helping fulfill other collector's lists. My organization has been horrible. I've got some many stacks of cards all over my office and in my man cave down stairs that I can't remember what's going on. Thankfully that should be addressed really soon as just today a huge order I placed with BCW arrived. Too bad I had to leave to go out of town today, otherwise I would have dropped what I was doing to start to get organized again. Look for a post on this process in the near future.

I'm excited for the new year and what it will bring. The release of 2017 Topps Series 1 is just around the corner, the changes made to '17 GQ have me excited and before I know it I'll be busting a box of my annual favorite, Allen & Ginter. Let's just hope I don't lose this renewed energy and I can't keep it going for another year. Thanks to everyone out there in blogger world for the continued support. Here's to a great new year.
at 10:21 PM