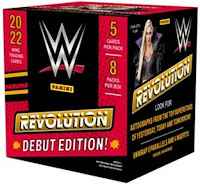 Panini's second WWE trading card release in 2022 happened to be the Revolution brand. I have to admit that I wasn't too thrilled with the news. I was still looking for WWE Prizm at retail and having mixed results so one one hand it was nice to have something else to chase. Hobby boxes weren't cheap (as expected), but the price didn't hold for very long before boxes could be had for as cheap as $65.00. The boxes don't guarantee an autograph so I'm guessing the speculators or flippers bypassed this product all to together.
I was familiar with the Revolution brand thanks to their NBA & NFL licenses. The design even showed up in 2021 Chronicles (baseball) as an insert set. I've never been wild on the design or the parallels, but I've seen some cool/wild inserts and designs. After paying my bills associated with hosting my breaks, I had enough to grab a box during a Labor Day sale so I thought I'd take a chance. My oldest daughter enjoys opening wrestling card boxes/packs with me so I thought if nothing else it'd be fun for the two of us. 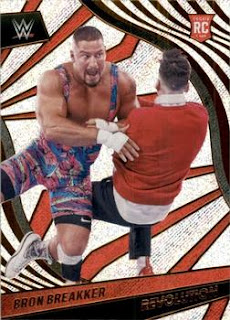 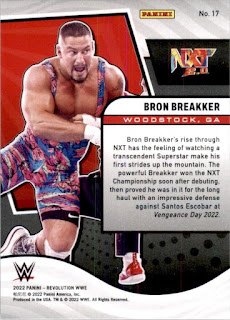 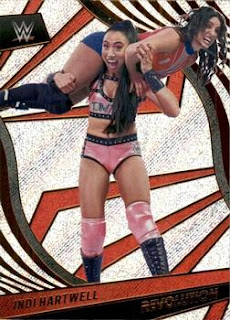 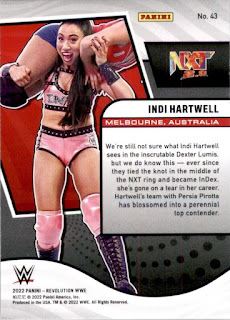 Here you have two examples of the base card design. It features a silver sheen holographic background with colored waves and angles layered on top. Black, Red, Gold are the main foil colors used on the front. The wrestler's name and the Revolution logo are in gold foil.
The back of the card features the same photo from the back, but outlined with white and a think black border. There is a bio box that lists where the wrestler is from and little about their in-ring career or persona.
PROS:
* The design actually works, much better for WWE than for traditional sports
* Most of the photos used are great action shots. The photo of Indi Hartwell has to be my favorite photo of her on any of her cards thus far released.
* A small and manageable set at just 150 cards
* A good mixture of main roster talent, NXT 2.0 and Hall of Famers
CONS:
* The photo is duplicated on the back
* At just 5 cards per pack & 8 packs per Hobby box, it won't be easy (or cheap) to build the set unless you have help in the trade department
* No guaranteed hits 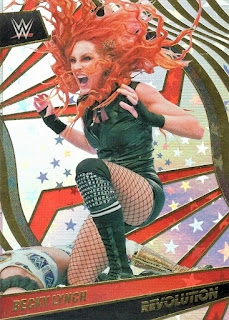 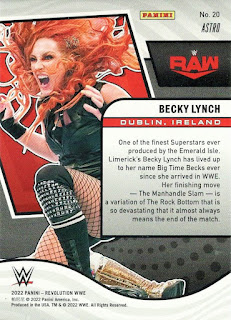 The Astro parallel seemed to be the most common as we pulled 3 from our box. The Astro cards feature small stars in the holographic silver background. In a very welcome move, Panini actually listed the parallel name underneath the card number on the rear of the card. I hope they continue to do this for all of their releases moving forward. 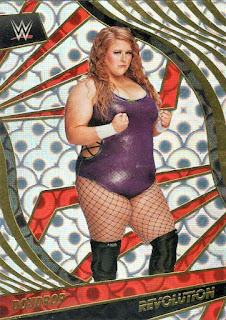 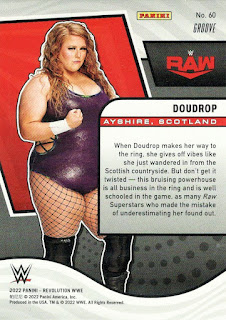 Groove parallels have small "disco" balls if you will scattered across the background of the card. This card of Doudrop was the only Groove parallel pulled. Not my favorite parallel if I'm being honest. 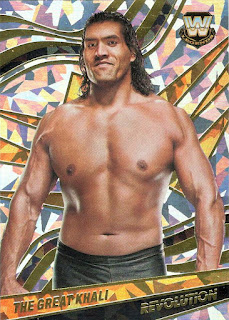 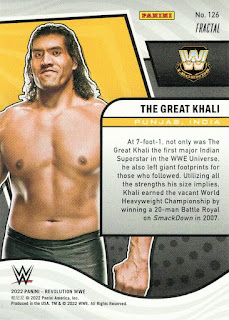 Fractal parallels have a "cracked ice" look across the back o the card. This technology or design has been used by several card companies over the years and isn't something I care for. I know some collectors love these type of parallels, but for me they are just "meh". 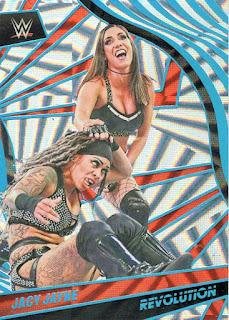 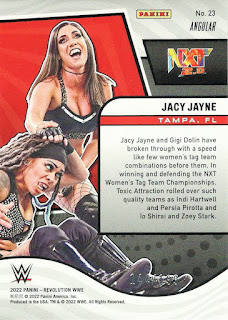 Angular parallels are probably my favorite thus far, I just like how the angled pattern in the background of the card meshes with the main design. The teal foil is also a nice touch. These cards are numbered out of /199. Jacy here is 144/199. 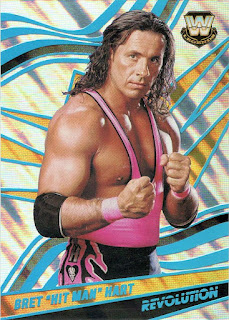 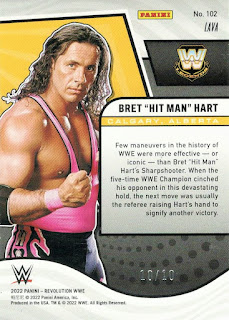 Lava parallels are one of the toughest to pull as these are numbered to just 10 copies. These have a angled sheen in the background that kinda looks like lava...hence the name of the parallel. I was shocked to pull this 10/10 Bret Hart card.
Looking at the checklist on TCDB.com, there are also Cosmic, Cubic, Galactic and Sunburst parallels of the 150 card base set. Good luck if you are chasing these for your favorite wrestler. 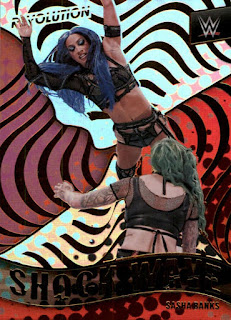 There are a few insert sets, but again with the small pack out of Hobby boxes you'll probably only pull a few. We ended up with 4 inserts I believe, including this Shock Wave card of Sasha Banks. Like with the base cards, inserts also have several different parallels to chase. While I don't mind parallels of the base set, making additional parallels of inserts is a bit much for my taste. 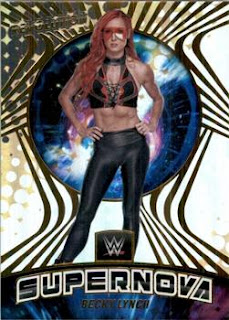 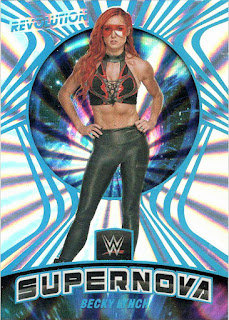 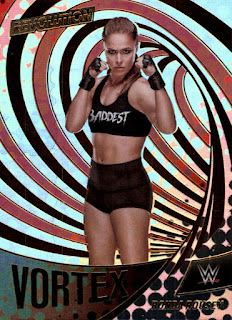 I'm rather fond of these trippy looking Vortex inserts. I can only imagine some of the various parallels that exist make this design look even more wild.
The one insert set that wasn't represented in my box was the die-cut Liftoff! The few I've seen from this set look great.
Overall I enjoyed ripping this box. I wish there were more cards/packs per each box as it didn't take by maybe 10 minutes to rip the whole box. I was pleased with the cards in hand however. They scanned surprisingly well, but they still look much better in hand. Even though each box didn't yield many cards, I'd be prepared to buy another as I'd love to build this set. I don't believe I pulled any doubles, but I have plenty of other wrestling cards listed on my TDCB profile so if you are a user there and want to work up a trade, hit me up...my user ID is flywheels. 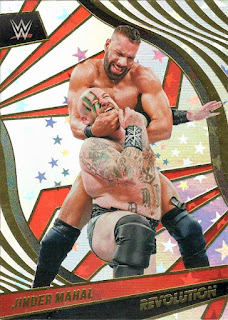 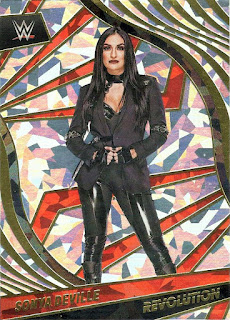 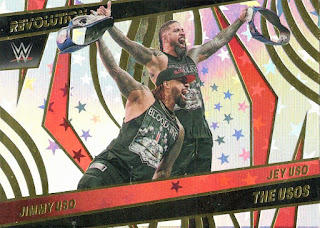