July means several things for me. 1) It's hot. 2) It's humid and 3) Topps Allen & Ginter release month. In past years I had a hobby box already paid for in advance of A&G's release, but this year I wasn't able to do so. My family and I have traveled so much since they got out of school on May 31st that it's been all I could do to keep up w/ other 2019 baseball card sets I'm working on. When I realized I was going to be down at Myrtle Beach, SC this weekend visiting my mother for her birthday, I knew there was a good chance the near by Walmart would have some A&G to help me "scratch that itch". I wasn't wrong. They had the 14 card value packs, the 3 packs w/ gold mini parallels and of course blasters. I grabbed one lone blaster as I'm trying to be a financially responsible adult right now...or at least until I get paid!

Late last night (or was it earlier this morning?) I finally laid down in bed and opened the blaster. I really didn't know what to expect out of A&G this year as I had fully researched the sell sheets, but it's a set that I look forward every year so I really didn't care. I know a lot of collectors like to crap on this release and I simply don't get it. If you don't like the non-baseball inclusions and inserts, then skip the set. I personally don't care that much for Heritage so I don't buy it.

But whatever, let's dig into the contents of my first packs of 2019 Allen & Ginter! First off I have to say that I love the look of the base design this year. I wasn't as fond of the last few years, but I'm really enjoying the look and feel of the 2019 set so far. 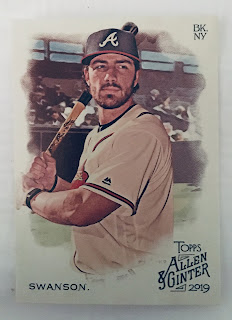 My first Atlanta Braves card from the product was none other than Dansby Swanson. This kid is having a heck of a year, posting career highs in HRs all before the All-Star break. I enjoy watching him play so much this was a great way to start off. 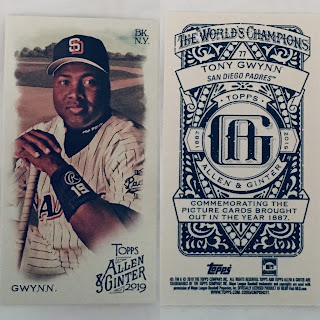 The first mini that fell out of the pack was this A&G back Tony Gwynn. While I never got to watch many of his games living on the east coast and all, I've always respected his game and his character off the field. Sucks that baseball lost such a great guy so early and I love the fact that he still gets new cards from time to time. This one will be going into my Hall of Fame PC collection. 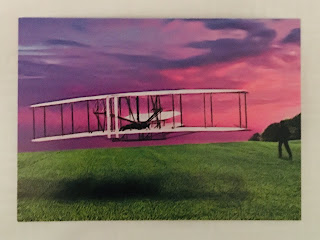 The History of Flight cards are beautiful in hand and I look forward to completing the 15 card set. It's kinda perfect too that this home grown NC guy would pull card #1 first as it features Orville and Wilbur Wright. 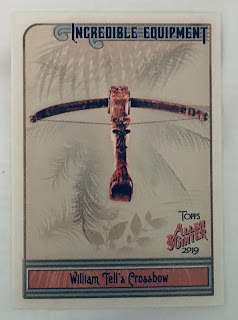 I feel as if this type of set as been done before, but these are also the types of sets that I really like. Rest assured that I'll be tracking down the rest of the Incredible Equipment cards in the set. 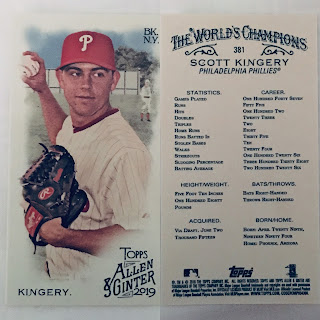 One of the other minis I ended up with was a SP. I don't build the mini sets so this one will be up for trade. Eventually I'll get everything I have for trade listed both on my trade lists here on the blog as well as on The Trading Card Database. 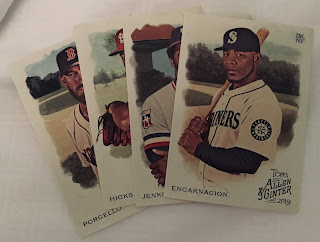 Speaking of SPs I also pulled 4 from the main set. This made me happy because in previous years I swear it seemed like I only pulled a few from a whole hobby box. I'm just starting to build the set and I've already got 4 SPs from one blaster. 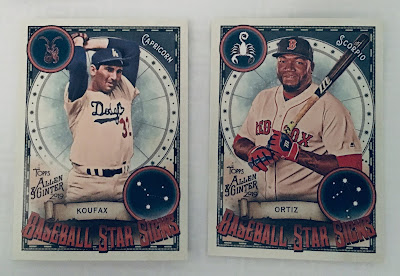 I'm not into Astrology and reading horoscopes, but I do like the overall look of these cards. I'm still on the fence whether or not I'll bother building this insert however. 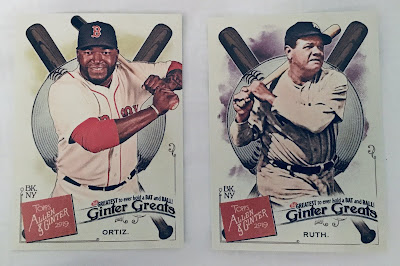 Ginter Greats are another full size insert that I'm on the fence about. In past years I wouldn't have a second thought on whether or not I'd build this set, however this year I'm going to focus more on the non-baseball sets. 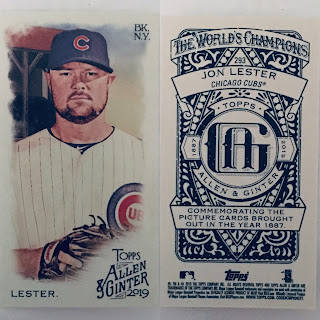 Another mini in the box turned out to be my second A&G back, this time of Cubs starting pitcher Jon Lester. I'm sure I can think of a Cubs collector or two who may be interested in this one. 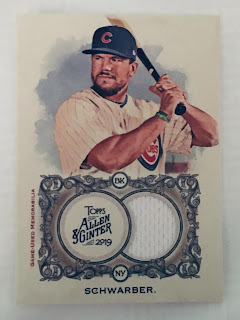 Speaking of Cubs, I got a retail hit! Full size relic of Kyle Schwarber. Kinda of a boring jersey relic, but aren't most of these days? I wonder how much longer Topps and other card companies will continue to produce boring cards like this? 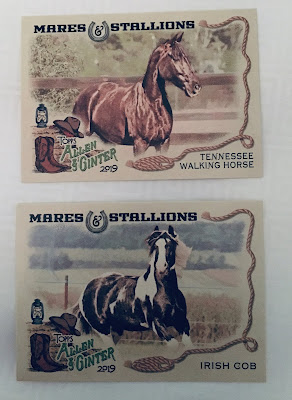 I've never been much of a horse person so these cards don't do much for me, but just for the heck of it I'll probably go for the set. At least they seem to be easy pulls. 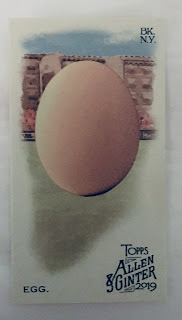 Jealous yet? Seriously, I don't understand this card. Period. Can anyone shed some light on this card for me? Anyone? 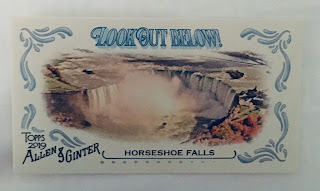 These Look Out Below! minis are awesome. I had no idea these fell 1:50 packs. This just made this particular blaster that much more fun. I'd love to complete this set, but I have a feeling this will be a little tougher challenge to complete. 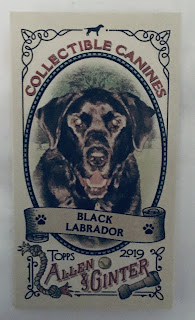 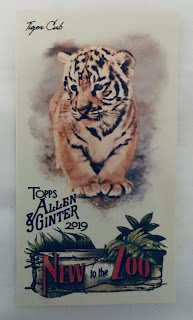 I'll round out the box with two more mini inserts. First we have Collectible Canines. I'm more of a cat person now, but I had several dogs growing up...one of which was a black Labrador. His name was Casey and he was a good dog. Still have some great memories of him and now thanks to this card I have a visual reminder of him of sorts.

The New to the Zoo minis look great. While I've yet to see any other cards from this set, this set is one that I'm sure I''ll enjoy collecting.

I really am looking forward to picking up some more A&G soon. Once I get back home from this weekend beach trip I plan on gearing up my eBay store with the hopes that my sales will help fund the purchase of a hobby box before the prices go up. For me at least this is one of the highlights of the summer as far as this hobby goes and it appears from my sample that Topps has released another great Allen & Ginter set.
at 11:48 AM