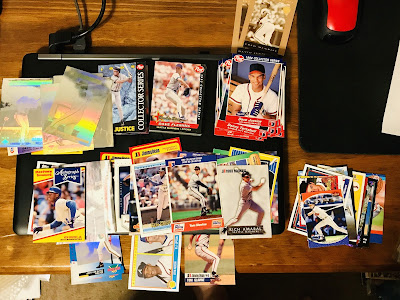 Steve from Tridents and Trading Cards hit me up on Twitter recently and asked about doing a trade. His baseball want lists are getting smaller and smaller and he told me he wanted to branch out and pick up some Topps football sets. I just happened to have a complete, hand collated set from 2012. We agreed to swap as he said he could help me with some of the recent food issue sets I had just added to my want lists over on TCDB. While Steve did send me a short video showcasing some of the cards, I was really impressed by the selection once the box arrived. I unpacked the box a few weeks ago and took a quick picture, but this trade deserved it's only dedicated blog post. 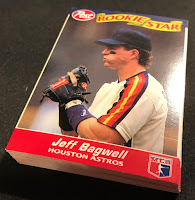 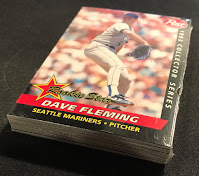 While I was able to put a dent into some of the food issue sets, he sent me the entire 1992 and 1993 Post cereal sets. The 1993 set is still shrink wrapped too! I remember these sets as a kid and ate many boxes of Fruity Pebbles trying to get as many of the cards as possible. Excited to be able to knock these off the lists so quickly. 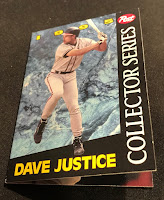 I'm not familiar with the 1995 Post set so I'm glad to experience this set with at least this one card of David Justice. He was my favorite Braves player growing up and by 1995 I had already started to move on from cards as I was getting ready for college. These cards are booklets and open up to reveal a larger full color photo of the player inside. 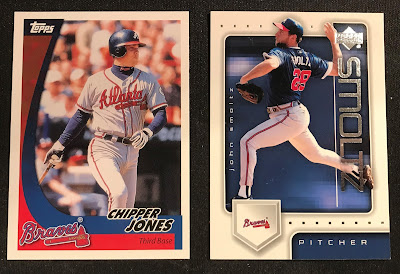 Sticking with the Post cereal sets, here we have 2002 (left) and 2003 (right). At some point the card companies got involved as Topps handled '02 while Upper Deck handled '03. There is a noticeable difference between the two years as the UD cards are printed on a thicker cardstock and feature a glossy UV coating on the front. I might have had a card from the 2002 set in my Braves collection, but the 2003 UD set is completely new to me. These are the only cards from these sets I currently have so I'm still basically looking to buy or trade for complete sets. 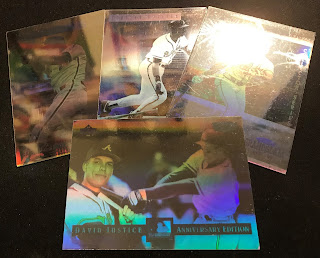 Ah, Denny's Grand Slam holograms. I loved these back in the day. I remember asking my dad if we could specifically eat at Denny's for dinner while on vacation so I could score a few pack of the cards. Since the cards were only given away with the purchase of select meals, I would turn into a "meal nazi" and made sure my family only ordered one of these special meals so I could get another pack! While these cards are prone to scratching and don't photograph easily, I love these. Thankfully the design of the Denny's Grand Slam cards would get better as the years progressed. 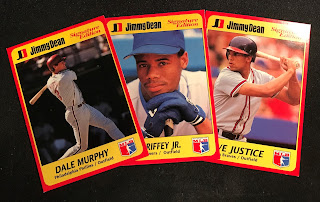 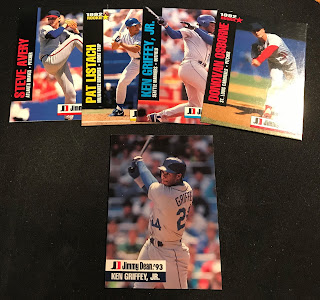 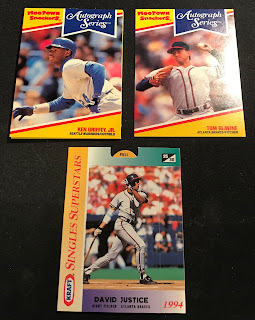 I only found about these 1992 Sargento MooTown Snackers cards from browsing the checklists over at the TCBD. Keeping it in the cheese family, Steve also sent one card from the 1994 Kraft Singles Superstars set...and of course it was of David Justice. 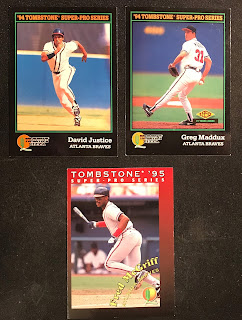 Score would partner with Tombstone Pizza in 1994 to release the Super-Pro Series. in 1995 it appears the two companies went their separate ways leaving Tombstone left to produce their own set. 1994 > 1995 easily. 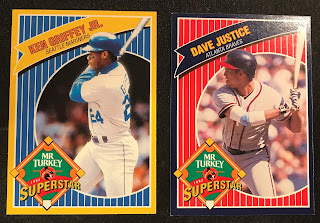 These 1992 Mr. Turkey Superstar cards are from another set I hadn't heard of before. It looks like Sara Lee had a line of lunch meat in the early 90's under the Mr. Turkey name. Must've been regional because I sure don't remember that. The card's design eats up a lot of the photo, but I've seen worse. I'm still looking to complete this set. 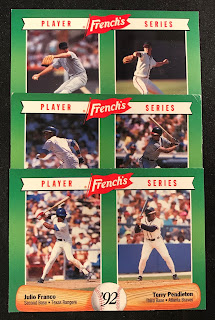 The 1992 French's set is one that I am familiar with, but sadly I didn't have any of the cards prior to receiving these 3. The green boarders remind me a little of the 1992 Fleer set...though I can't tell if that's a good thing or not! 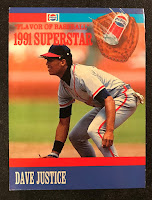 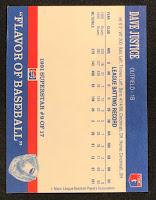 These 1991 Pepsi Superstar cards are new to me as well. I love the glove catching the Pepsi can in the top corner of the card. 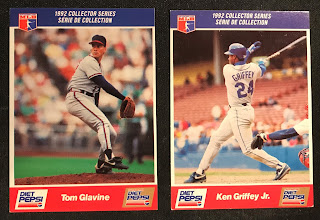 The following year Diet Pepsi got the card treatment with it's own set...however the design on both the front and back looks a lot like the 1992 Post cereal set. Coincidence? 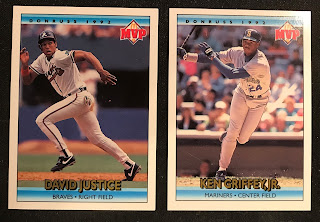 When it comes to trading cards at McDonald's I was more familiar with their Hoops and Upper Deck sets, however in 1992 Donruss partnered with the golden arches to release a MVP set. Minus the McD's MVP logo in the top corner and the player's name being printed in a metallic gold ink, these look very similar to the regular 1992 Donruss set. 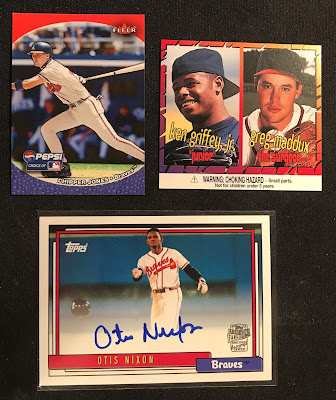 These are probably 3 of my favorite cards in the box. First we have a 2003 Fleer Pepsi card of Chipper Jones. These are smaller than your standard trading card, but still very nice. The set is 30 cards so I still have a good many of these to track down. The next smaller than normal card is from the 1996 Pizza Hut set. There are only 4 cards in this set and these seem pretty hard to track down on the secondary market. I love the pairing of Griffey and Maddux as both players were on the top of their games in the mid-90's. The last card hails from the 2013 Topps Archives Fan Favorite Autograph set. While Otis Nixon might have struggled with his share of personal demons off the field later in his career, I loved watching him blaze the base paths and patrol center field in Atlanta. I believe this marks my first auto of him too!

At first glance I thought this was a random Fleer Tradition card that Steve sent over. I flipped the card over and noticed it was 3 of 12, then I noticed the Twizzlers logo at the bottom. I knew Twizzlers had some card sets, but I didn't know they collaborated with Fleer. 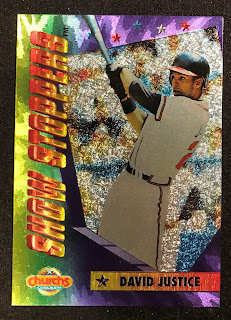 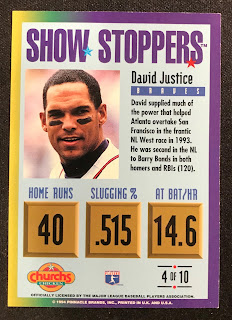 What?!?! Defux on a food issue trading card?! Yes please!! I'm familiar with Church's Chicken (though I've never ate any of their food), but I didn't now they partnered with Pinnacle in 1994 to release two different sets. These Show Stoppers are beautiful in hand and I must complete this set as fast as I can! 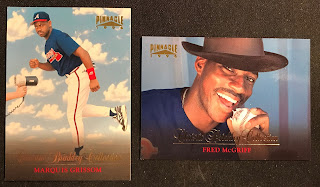 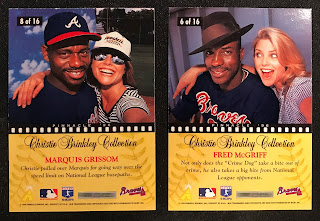 Steve must have peeked at my want lists as he sent over two cards from the awesome 1996 Pinnacle Christie Brinkley Collection. I now have most of the Braves from this set, only leaving me with the Indians players before the set is complete.
We are finally to the end of this post! A huge shout out to Steve for hooking me up with so many great cards. I'm having a fun time working on all of these various food issue sets and you've been a tremendous help with getting me kick started.
at 2:16 PM