I teased on Twitter a few images of a shop I found late Tuesday night while browsing Facebook and seeing a store mentioned on a friend's post. The store just happened to be located in a small NC town that I would be driving through the very next day on my way out of town for work. I set my alarm as I had added motivation for getting out of the house early. 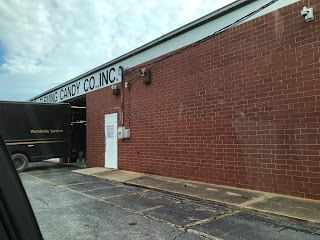 It took me about an hour to get to my destination, which was pretty easy to find...just off I-85 in Salisbury, NC. Fleming Candy Company. Not much to look at, in fact I almost drove right by it as it looked like an old warehouse. Turns out a small section at the front of the warehouse is the store front. I got there a little before they opened at 9 AM. Shortly after 9 I walked in and was immediately greeted by a nice lady. The store wasn't very big, maybe 3 aisles total. I told her what I was there for and she showed me a section of cards in the middle aisle, a glass display case on the other side and mentioned there were a few cards/packs in the display case by the register. 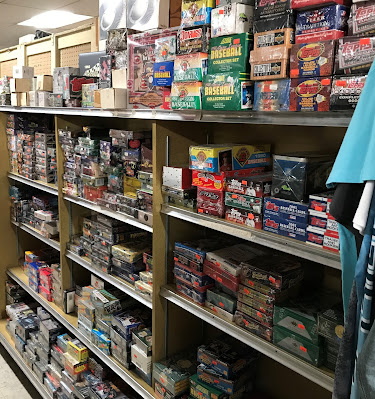 This section of cards was about 9 feet long give or take. Baseball on the right, football in the middle and basketball on the left with NASCAR all along the bottom shelf. The top was stacked with complete sets mostly. 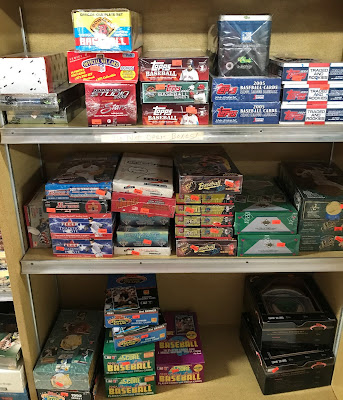 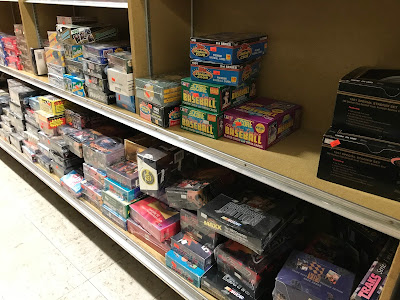 The baseball section wasn't as robust as the pictures I found on their website, but there was some nice stuff left...at least in my opinion. The lady that greeted me said that stuff has sat on the shelves for awhile, but started selling in the last 3 months. Thanks COVID-19.
Prices of these boxes ranged from $12 (Score, Studio) to $60 (Bowman, Topps). The bottom shelf had some 1991 and 1992 Stadium Club, 1992 Fleer Ultra and 1991 Score...all right up any junk wax conasuir ally. 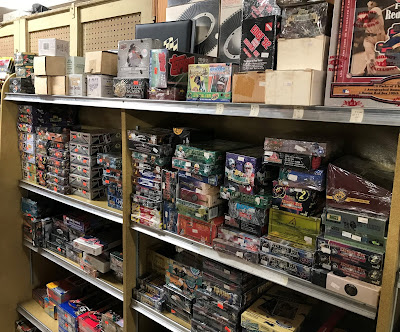 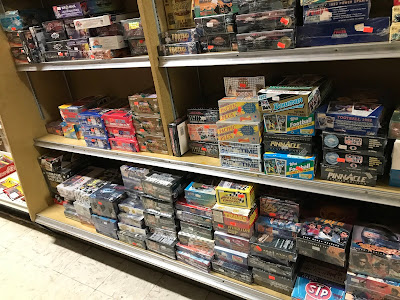 The football section definitely had more selection to choose from. Most of this product was early to mid 90's. Collector's Edge, Pacific, Pinnacle, Pro Set, Topps and Upper Deck...even some 1992 and 1993 Bowman.
The basketball section had some old Fleer and Hoops boxes, but you could tell the prices had been marked up whereas it seemed like many of the prices of various football and baseball boxes had marked down. I would have loved to pick up a basketball box to feature in my Affordable Group Breaks, but I wasn't sure how many people would be excited about a box of mid 90's Hoops so I left them on the shelves.
By the way, the rest of this aisle was full of hard to find candy (opposite the cards) and fishing gear after the card section. Talk about eclectic! 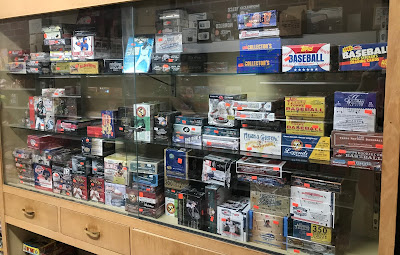 Next I went around to the other side to look in the case. This is where the semi-new stuff was kept...and since it's behind glass you know the prices aren't cheap. I didn't spend a lot of time as pretty much everything was more than I wanted to spend at the time, but looking back at the pictures I took there was some nice boxes to choose from. 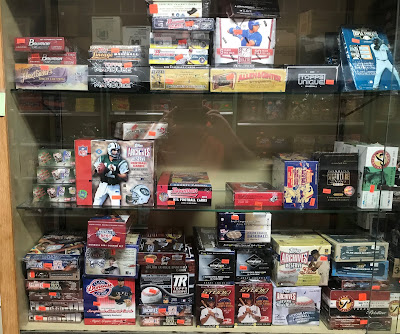 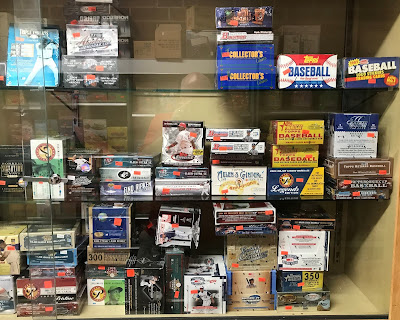 See anything you like? Allen & Ginter, Bowman, Pristine, Reserve, Triple Threads, Unique!
There was so much in this section I took a quick video so everyone could have a better idea of the selection. 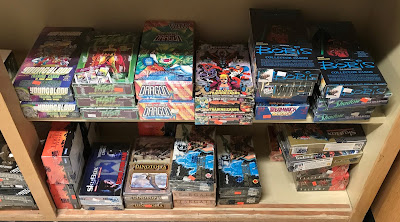 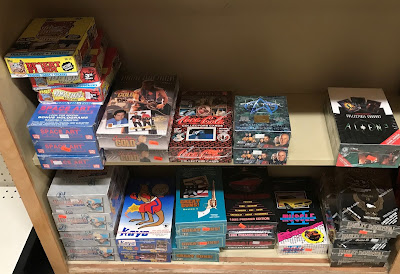 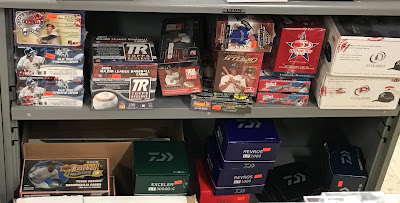 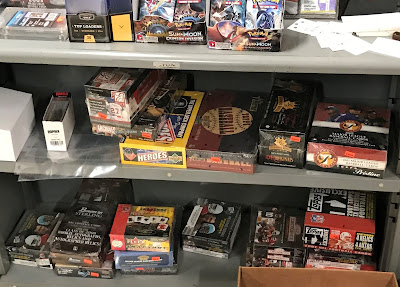 As I was at the counter checking out, I noticed even more boxes on shelves behind the counter. Most of the price tags used were those bright orange and with my poor eyesight it was hard to read the prices on those small tags. These boxes were cheap, but they didn't seem to be too bad...at least what I could see.
Just above these shelves was a stand that displayed some of the loose packs they had. These ranged from just a few bucks to higher for older packs such as sealed tins of Donruss Preferred (football). They even had a sealed gold tin box in one of the side cases.
I was told earlier that they may have more cards in the warehouse! It does make me wonder and I will visit again in the near future. Upon checking out the guy did write down what I was purchasing as he mentioned he wanted to check the back to see if he had more of what I purchased. Hmm...
So, what did I purchase you ask? Well even if you didn't ask here you go... 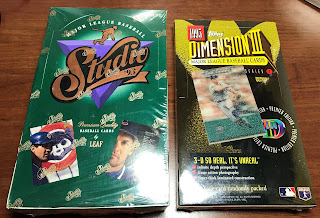 My personal purchases were limited to just two boxes. Just two you ask? Well, I wanted to buy more, but I really had a hard time deciding 1) what to get and 2) did I really need it. I settled upon a box of 1993 Studio...which I was looking for anyhow and a box of 1995 Topps DIII...because lenticular cards are cool. Both of these boxes were just $12 each. 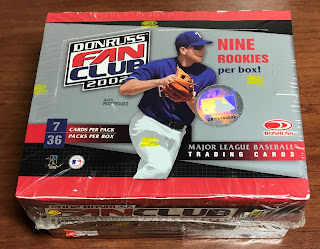 I almost didn't see this small box of 2002 Donruss Fan Club. I grabbed this specifically to feature in a upcoming edition of my Affordable Group Breaks. I've opened some of this product in the past and liked it...plus their asking price wasn't bad at all. 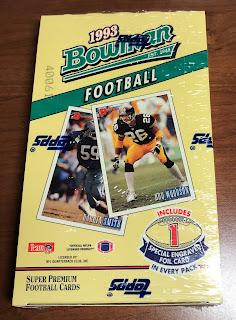 I mentioned earlier that the football section was much more robust with different product to choose from. Most of the stuff was pre-1995 and since I didn't pay the NFL much attention until the Carolina Panthers came along in 1995, I didn't know what to get. I was leaning towards a box of 1991 Upper Deck or 1992 Topps as they both were cheap. I also looked at 1994 and 1995 Upper Deck, but ultimately decided on this box of 1993 Bowman. More than likely this box will also appear in a future Affordable Group Break.
Overall this place was pretty cool. The store was organized in the sense that I could find what I was looking for, but the cards seemed to be all over the place, however being surrounded by candy and fishing gear while looking at cards was odd. I can see how someone could easily overlook this store because 1) it doesn't look like much from outside and 2) the selection is all over the place. The staff was very nice and very helpful. I asked if I could take pictures for this blog post and they didn't mind at all, if anything else it seemed they were happy that I was so happy! I'll be hitting up Fleming Candy Company again very soon...after all I should've brought that box of Demolition Man home with me!!
at 10:56 PM